Apple Music is targeting Gen Z users in its battle with Spotify. On Friday, Apple launched 10 new Apple Music playlists focused on the music interests of Gen Z users — including one playlist that features the latest tracks to go viral across social media apps like TikTok. Other playlists feature emerging artists and sounds, experimental or cross-genre selections or music by mood — like playlists for getting energized to go out or one to destress, for example.

One of the more interesting additions from this new group — at least from a technology perspective — is the new editorial playlist, “Viral Hits.” While Apple doesn’t specifically mention TikTok by name, the short-form video app’s influence is apparent.

TikTok’s music-laden memes and trends today heavily influence what younger users are listening to. The app has also long-since proven its ability to break new artists and send tracks, both new and old, to the top of the streaming charts across Spotify and Apple Music, as well as the Billboard charts, at times.

With the “Viral Hits” playlist, Apple will round-up the songs that are making the leap from social media channels to “the broader cultural stream,” the company explains.

“Social media hasn’t just changed how we communicate, but also what we listen to and how we hear it,” says Apple. 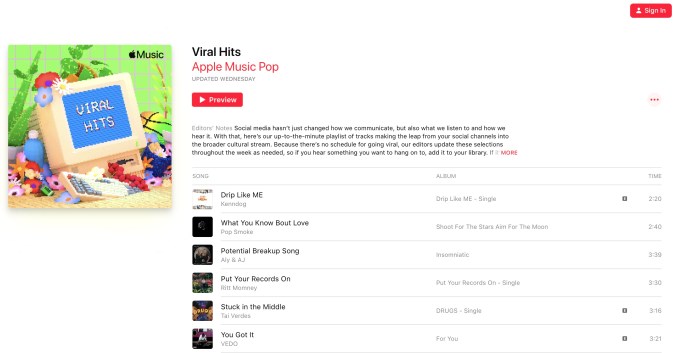 Because of the nature of viral trends, there’s no set schedule as to when the “Viral Hits” playlist will update. Instead, Apple Music editors will update the selections throughout the week, as needed.

Currently, there are 98 songs representing nearly five hours of music on the playlist, including many tracks that are also now on Apple Music’s top charts. But the tracks on “Viral Hits” aren’t ranked by number of plays they’re receiving — it’s an editorial selection, not a chart.

Apple isn’t alone in formally acknowledging the power TikTok has over popular music. Spotify last week launched a new feature for artists that would allow them to promote tracks that were going viral on TikTok.

In addition to “Viral Hits,” the other new Apple Music playlists aimed at a Gen Z demographic include the following additions:

Apple says the new playlists were created specifically with the needs of Gen Z users in mind, describing this young group as “tech savvy, social media mavens” as well as “rabid music lovers.”

In addition to the Gen Z playlists, Apple Music released 24 brand-new playlists aimed at helping users center and find a few moments of calm. These playlists follow what has been a tense week in the U.S., particularly, due to the 2020 presidential elections and their delayed results.