Federal officials declared a public health emergency Thursday in Puerto Rico as hundreds of thousands in the U.S. territory still have no power or running water four days after Hurricane Fiona slammed into the island.

“The current (runoff) is tearing apart some of our infrastructure,” Alma Frontera, of the Foundation for Puerto Rico, told FOX Weather over the noise of her generator. “Right now, the main issue is the lack of power and also the lack of potable water.” 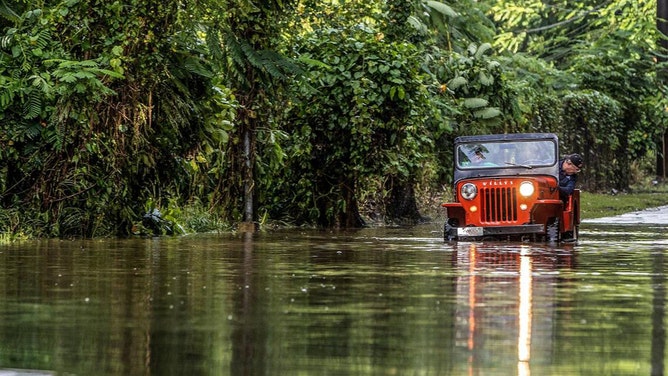 Puerto Rico Gov. Pedro Pierluisi saw first hand how isolated some communities are. He said in a tweet that he visited a town where authorities were able to fill in a damaged road and reach 13 families that have been cut off from civilization since Fiona hit.

The island’s Emergency Portal System reported that only 38% of LUMA Energy customers have service. LUMA provides power to Puerto Rico’s population of 3.2 million. That means about 2 million Puerto Ricans are still in the dark and struggling with generators.

Operations Associate with Team Rubicon Edith Alvarez-Garcia says the team looks to clear roads and assist in roof tarping while in Puerto Rico.

“We still don’t even have power in our hospitals. It’s incredible how my two main hospitals of San German not just the local hospital but our regional hospital still doesn’t have power,” San German Mayor, Virgil Olivera told FOX Weather’s Nicole Valdes while reporting in Puerto Rico. “Based on our previous experience I expect there are going to be areas where power may be out for more than a month. That’s a deadly fact not just for our economy but lives. This is a life-or-death situation.” 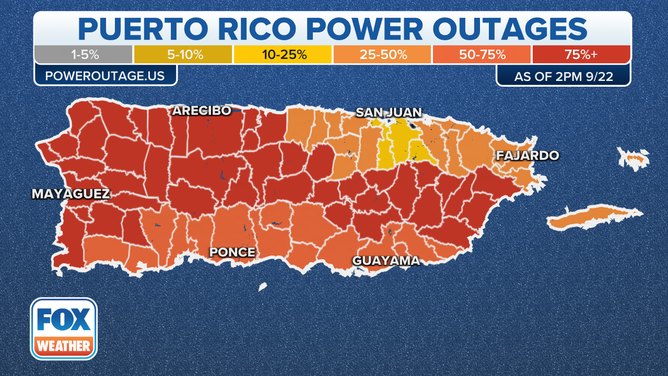 Over 968,000 homes and businesses still don’t have power.

PowerOutage.US showed the hardest hit areas in western Puerto Rico and across the midsection from west to east, where 75% to 100% of LUMA customers are without power. Even the south coast is only 60% powered. The area around the capital of San Juan shows the biggest rate of power restoration.

Some residents say those efforts are not enough.

“Today, this is the moment to prove to the people of Puerto Rico that you (LUMA) were prepared. Not to me as mayor, but to the people,” Mayor Olivera said. “Unfortunately today four days after the hurricane I simply haven’t seen the proof that they’ve been making a significant effort to pick up the power lines and poles for people to have this life or death service.”

Only 67% of water-service customers have running water, according to the portal. The government-run Puerto Rico Aqueduct and Sewer Authority (AAA) supplied water to more than 1.2 million customers before Fiona. AAA warned those with running water to boil it for 3 minutes before drinking due to concerns about contamination.

Crews have been inspecting reservoirs and filtration plants for damage as floodwaters retreat, AAA reported. After more than 30″ of rain in some areas, the water is slow to recede.

San Juan officials were not going to wait.

“We made the decision to rent generators to power the pumps of @AcueductoSPR that supply drinking water to the communities of San Juan,” tweeted San Juan’s mayor. “The Cottos (Caimito 2) already have their generator. We continue!”

Pierluisi said Wednesday that he said he asked President Joe Biden to fully fund the costs of debris removal, search and rescue, power and water restoration, shelter and food for one month.

HOW TO WATCH FOX WEATHER ON TV

“Too many homes and businesses are still without power, without clean drinking water,” Biden said during a news conference Thursday. “Yesterday, at the governor’s request, I immediately approved an expedited major disaster declaration to provide individual and public assistance to help people and communities recover from it, and this declaration will get federal resources quickly, and it’s going to help people start rebuilding their lives.”

Valdes has been talking to the people of Puerto Rico as they clean up, she said most are still in shock at the devastation of a Category 1 hurricane.

“There’s a mix of sadness, anger, frustration, shock, and strength among Puerto Ricans who simply feel like the circumstances are stacked against them,” Valdes said.

“On top of that, many Puerto Rican’s feel neglected and that their leaders have failed to learn and act on the lessons Hurricane Maria taught many,” Valdes continued. “They hoped the devastation and deaths from the storm five years ago would lead to better protocols and a safer infrastructure that would keep their power intact rather than force millions to try and survive in the dark, with no water and in the scorching heat for an unknown amount of time once again.”

An influx of hundreds of FEMA personnel, volunteers and aid organizations have joined Puerto Rican authorities in an effort to speed up the recovery process.