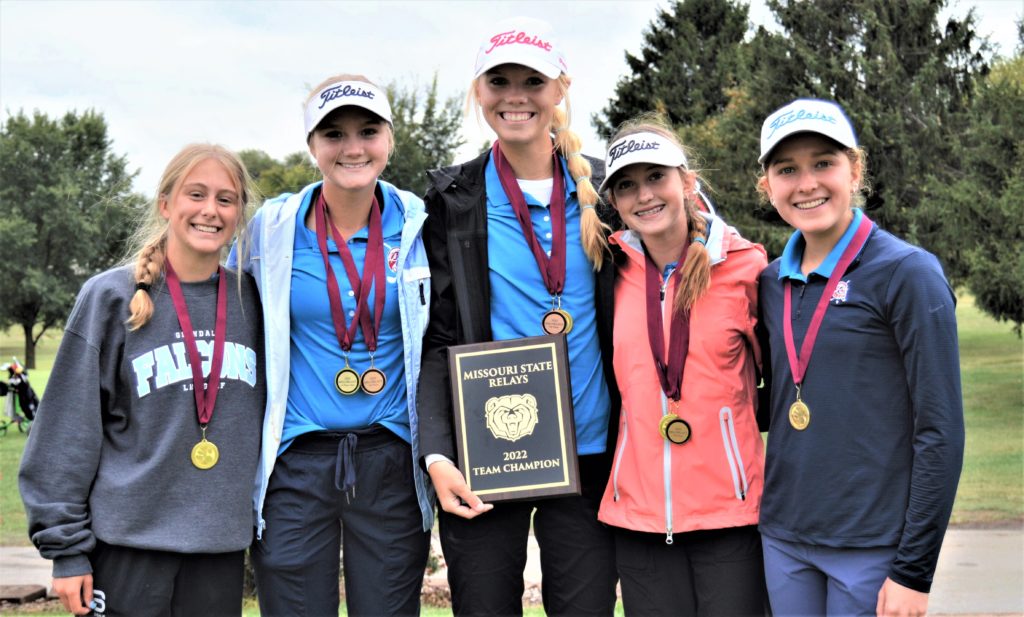 Despite cold and rainy conditions, four Glendale golfers posted scores in the 70’s, en route to claiming this year’s tournament title. Out in front for the Falcons was Page Bowman who carded a five over par round of 76. Also carding scores in the 70’s were Audrey Duvall with a 78 and Scotlynn Blackington, along with Catherine Rhoads, each who came in at 79.

Springfield Catholic, behind top medalist Lyla Louderbaugh’s 70, placed second with a score of 350. Third place went to Rolla with a 372. Pacing the Bulldogs was Audrey Smith who carded an 84.

Sixteen teams participated in this year’s tournament, a tournament that meet Director Kevin Kane says he felt they were lucky to get in.

“With today’s forecast, and the way the radar looked when we teed off, whether or not we’d be able to get the tournament in was questionable,” said Kane. “But overall things turned out well. We had some great scores from several kids today, in an event that was very competitive, so I’d say the tournament was a huge success.”

Glendale’s effort was another good one for the Falcons who have placed no worse than second in three previous outings this year. Besides picking up Thursday’s MSU Relays title they also won at Willard earlier this week. The Falcons finished as runners-up at Silo Ridge in Bolivar and Camdenton.

Glendale head coach Ron Yokum was more than happy to see his girls pick up this year’s MSU Relays title.

“It’s always fun to win a championship and our kids put up a great score to get a win here today,” said Yocum. “You know I can’t remember a team of mine ever having four girls card scores in the 70’s for one tournament. Today’s win was such a great effort from my kids and I couldn’t be more proud of them.”

Yocum wasn’t the only person who was proud of the Falcons.

“It was rainy and cold today so playing conditions were uncomfortable. But we were focused and played well, to get today’s win, despite the inclement weather,” said Glendale’s Page Bowman. “Being this year’s MSU Relays Champion feels great, and I’m really proud of my team.”

Springfield Catholic’s Lyla Louderbaugh fired a one over par 36 on the front side, and a two under par 34 on the back, to record her top medalist round of one under par 70.

“I don’t think the weather effected my game today physically, but it definitely did mentally,” said Louderbaugh. “I didn’t play my worst game, but I didn’t play my best either. I just feel good about being able to have finished my round at one under par 70.”

With the MSU Relays now behind them Glendale’s Yocum said his kids are pumped for what lies ahead.

“We have some big tournaments to get ready for. There’s Pearson, conference and district coming up,” he said. “Hopefully we can do well in them and if we’re fortunate enough move on to state. So, even though we’ve had some success early this year, we still have some work to.”