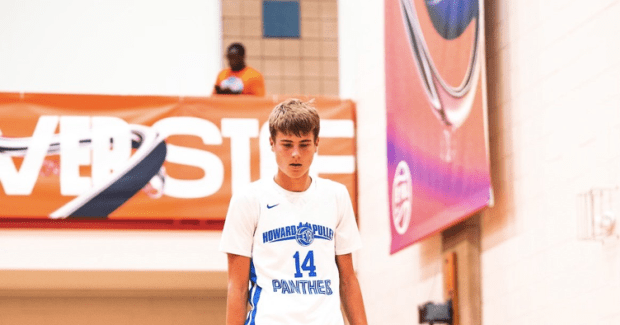 Looking to add one more player to their 2023 recruiting class, Greg Gard and the Wisconsin Badgers have prioritized Lakeville North (Min.) forward Nolan Winter for over a year on the recruiting trail.

On Friday, the Wisconsin men’s basketball team was able to secure a commitment from the talented three-star out of Lakeville North High School.

A Minnesota legacy, this is a significant win for Greg Gard in the 2023 class. Winter’s father played basketball for the Gophers and his mother played volleyball for Minnesota. Despite those ties, Wisconsin was able to win out his recruitment behind a phenomenal recruiting effort by assistant coach Joe Krabbenhoft, who has done well in recruiting the state of Minnesota since joining the staff.

As a player, Winter is an inside-out big man with the ability to play small forward, power forward, or potentially center at the next level given his athletic ability and 6-foot-11 frame. He will need to add strength in college, but he has a lot of tools that set him apart as a prospect.

Winter is an excellent passer at this stage of his career and his blend of length and agility makes him fun to watch around the basket. He can also step out and hit from behind the three-point line, which makes him a tremendous fit in Wisconsin’s scheme. Winter has been a priority recruit for Greg Gard for a while now and is the type of forward that can flourish in Madison. He is still developing as a prospect, but he possesses a ton of upside and can play both ends of the court at a high level. This past season he averaged a team-high 18 points per game and just shy of ten rebounds per contest for his high school team.

The biggest question for many people is where will Winter fit in Wisconsin’s rotation? Is he potentially a center down the road? Could he play small forward, or is he a stretch-four? With the way the game of basketball has shifted to a more positionless sport, I don’t think it really matters. Winter’s size and skill level make him the type of player you want on the court, and he can present mismatches on offense. He is a strong rebounder and shot blocker but can also run the floor and take people off the dribble on offense. His father is a former 7-foot center, so that could be a potential path for him depending on how he grows, but he is currently a very versatile player that could do a little bit of everything on the court.

Overall, he is a consensus three-star prospect and the No. 34 power forward in the country according to the 247 Sports Composite. However, On3 has him rated as a four-star and the No. 85 player in the entire 2023 class.

Winter is the fourth and likely final commitment for the Badgers in the 2023 class. He joins:

With Winter’s commitment, the 2023 class now ranks inside the top 25 of the 247 Sports team rankings, with Winter being the No. 2 player in the state of Minnesota for his grade, and the second Minnesota native in the class, joining Jack Janicki.

On the AAU circuit, Winter plays for Howard Pulley Basketball, one of the top traveling programs in Minnesota. Some notable Wisconsin players to come out of this program include Jared Berggren, Jon Bryant, Brad Davison, Joe Krabbenhoft, Jordan Taylor, and Kammron Taylor.

The addition of Winter not only helps bolster the 2023 class and helps the future of Wisconsin’s frontcourt, but it could also help the Badgers in future classes as well. Greg Gard and assistant coach Joe Krabbenhoft have already offered Winter’s high school teammate Jack Robison, a three-star wing with other offers from Minnesota and Nebraska in the 2024 class. Wisconsin is in a good spot for Robison early on, and adding his high school teammate can’t hurt.

Additionally, Winter plays AAU basketball with top-100 point guard Daniel Freitag and forward Jackson McAndrew, both of whom are offered prospects in the 2024 class with strong interest in Wisconsin. Each was on campus for the Illinois State game earlier in the month.

The bottom line is Winter’s commitment is significant on multiple levels. Not only is he a talented player on the court, but the Badgers also beat out rival Minnesota for him, and his commitment could help them with several of their top targets in the 2024 class as well.

You can check out some recent highlights of Winter in action below.

Why Aidan Hutchinson could be 2022 NFL draft’s first pick