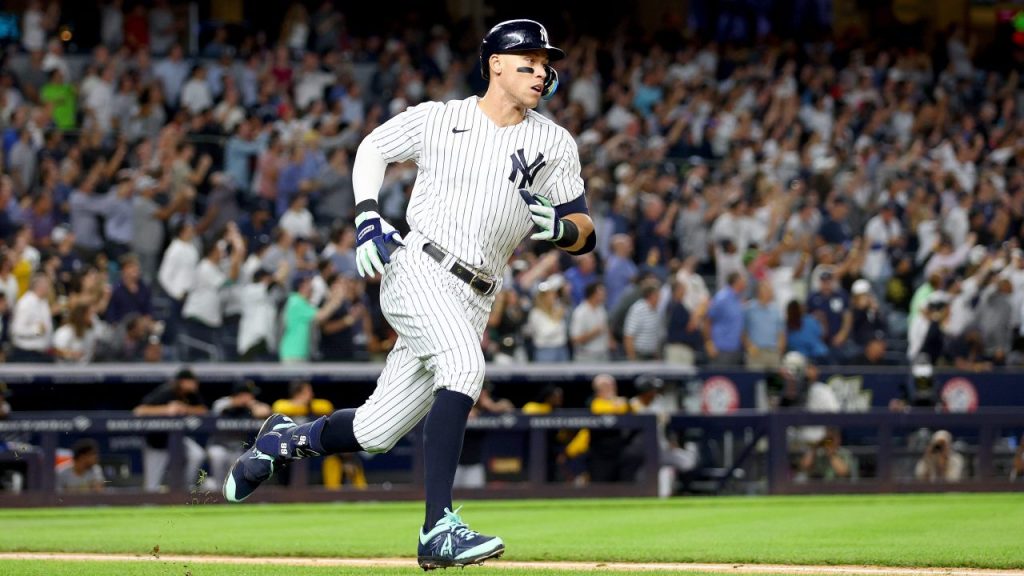 As Aaron Judge makes his final approach to statistical glory, everyone wants a piece of the New York Yankees. And while it’s understandable that baseball’s national TV partners are licking their chops at the prospect of televising the 6-foot-7 magistrate’s date with history, the honor rightfully should go to YES Network.

As such, here’s a modest proposal, one that won’t include an exhortation to devour Irish babies. On Friday night, before Apple TV begins streaming a Yankees-Red Sox showdown that could prove to be a milestone moment for baseball and everyone watching, the Bombers should sit Judge. In what would function as a Bronx cheer directed toward the digital interloper, the Yanks could choose to remand Judge to the bench for one night, thereby depriving Apple of a shot at stealing TV’s thunder.

While this admittedly would be an egregiously petty move, there’s actually a sound baseball-type reason for taking the bat out of Judge’s mighty meat hooks: The linchpin of the Yankees’ lineup hasn’t had a proper day’s rest since Aug. 3. Since he’s responsible for roughly all of the team’s production—his batting average is 20% higher than the guy directly behind him—there’s no harm in giving Judge a breather before the playoffs begin.

Having justified this entirely hypothetical move with an appeal to safeguarding the straw that stirs the Big Gulp, it’s hard to understate just how satisfying such a gesture might be to the Yankees’ home network. Since Apple’s seven-year, $595 million deal to secure the Friday Night Baseball package was first announced in March, the tech company has been a stone in YES’ shoe. Even though two of the four Apple games that otherwise would have aired on YES were less than momentous (nobody’s going to lose sleep over the loss of a Royals or Tigers matchup), the tech giant’s late-innings deal with MLB caught the RSN on its heels.

Simply put, YES had set a schedule that ensured that it would carry a sufficient number of games to meet the guarantees it makes each year with its distributors, and Apple’s sudden insertion into the mix means that the RSN might miss its target by a game or two. As was made evident by the make-goods that were coughed up by the RSNs in the wake of the long COVID hiatus of 2020, failing to hit the mark can be a pricey proposition. (Through Wednesday night, YES has carried 117 Yankees games, and with just 13 games left in the regular season and Fox, ESPN and TBS all locked in for upcoming national dates, the hometown channel will go down to the wire.)

A similar arrangement between baseball and Peacock also provided a twinge of gluteal grievance, although YES only lost one game—a June 5 Tigers-Yankees pairing—to NBC’s digital sibling. Still, every game scrubbed from the YES roster makes it more difficult to satisfy the RSN’s carriage agreements, and the Peacock deal arrived just a day before the Yankees were to play their season opener. It’s hard to plan for contingencies when you’re 24 hours out from Opening Day.

For what it’s worth, Amazon Prime Video’s pickup of 21 exclusive Yankees games in no way impacts the YES seasonal tally, as the streamer (and 15% shareholder in YES) merely replaced local station WPIX-11 as the steward of that smaller package.

For what it’s worth, we are in no way suggesting that YES shares our jaded worldview. The argument is ours and ours alone, but there’s a point to be made here beyond the sheer joy of invoking chaos. Apple is spending a lot of dough-re-mi on its foray into big-time sports—on an annual basis, the gizmo-maker will fork over $55 million in rights fee while committing another $30 million to advertising—but somebody’s got to stand up for the fans and the beleaguered RSN model.

Baseball, after all, is a localized phenomenon, with much of the heavy lifting on the fan-service front being done at the level of the regional sports nets. In the New York market, YES’ Yankees coverage regularly out-delivers the four broadcast affiliates, and through Wednesday night’s outing against the Pirates, which peaked at 756,000 viewers, the network’s in-game ratings for 2022 are at an 11-year high, up 24% versus the year-ago period. That so many Americans identify as baseball fans is because they’re able to follow the action nearly every night via the local RSN feed, and since older enthusiasts simply aren’t ever going to bother with streaming, every game that is exclusive to one of the over-the-top services is a game that won’t be seen by the people who make up the biggest part of the sport’s base.

On a more prosaic note, the thought of Apple TV’s Katie Nolan calling Judge’s historic homer is crazy-making for Yankees fanatics—and not for the usual knuckle-dragging “ugh, there’s a lady in the booth” reasons that get thrown around in the stinkier regions of the online cesspool. She’s from Boston, for crying out loud! And yes, parochialism works both ways. Imagine Phil Rizzuto calling David Ortiz’s final game or Dave Roberts’ theft of second base in Game 4 of the ALCS. Yeah, thought so.

As it is, Yankees fans can probably look forward to no more than a handful of upcoming YES games, as ESPN takes its cuts on Sept. 25 and TBS and Fox follow shortly thereafter. And ESPN always has an option to snatch another game from the local outlet before the Yankees’ final series against the Rangers plays out. The odds favor an outsider lucking into history, but TV’s always been fair game. But for Judge to eclipse Roger Maris on the Ted Lasso platform—a show about soccer, no less—is insupportable.

Bench him, Boone, if just for the night. Judge could use the long-overdue break, and your pals at YES would, quite possibly, appreciate the gesture—even if the move doesn’t set the RSN up for its own date with history. Would such a scheme rankle the commish? Probably. Would it cheese off the 46,537 fans who’ll pass through the turnstiles tonight for a shot at seeing the big fella take a trot around the infield? Oh, you bet. But life is short and brutish, and not fair at all, and what’s a night of dashed hopes when weighed against the sweet intoxication of malicious revenge?

Down comes the gavel. This provocation is adjourned.

Confronting The Risks Of Innovation And Technology

Smartphone too hot to handle? How to keep iPhone, Android phone from overheating in summer weather