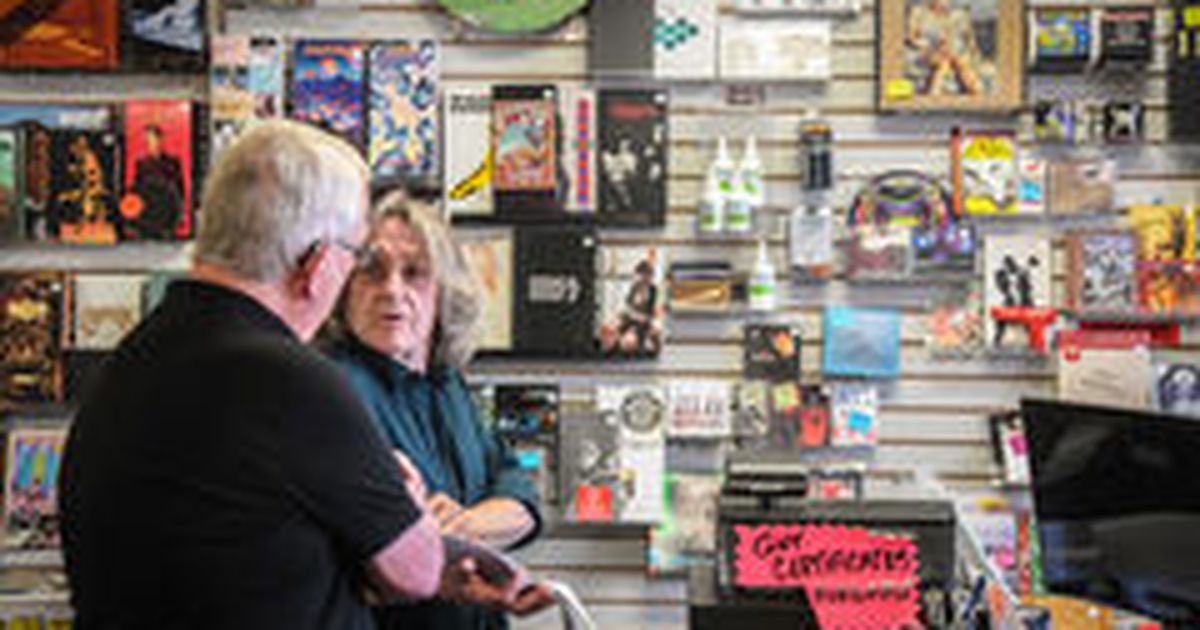 The line snaked around the 1600 block of North Monroe street during the first Black Friday Record Store Day 14 years ago at 4000 Holes.

“It was incredible,” 4000 Holes shop owner Bob Gallagher said. “By 9 a.m., when I opened, there was an endless number of music fans waiting to get in the door.”

Record Store Day, founded in 2008, is a celebration of independent record stores, and often features special releases, re-releases, box sets and more. In 2010, a Black Friday event was added to the lineup.

What has surprised Gallagher most is how far some folks have traveled to score vinyl on Record Store Day.

“We had a guy wait in line one year who came in from Seattle,” Gallagher said. “He knew he had a better chance of getting the albums that he wanted by travelling to Spokane than trying his luck in Seattle. He had to get the albums he coveted.”

That’s how it is for music fans who are willing to make the effort in order to score new albums and or reissues, which have a limited release.

“You can never beat a day when there are a bunch of brand new albums coming out,” Gallagher said. “And there are so many great albums and reissues that are coming out on Friday.”

Gallagher will have more than 400 new releases in his store, ranging from alt-rock pioneers the Cure, to Motown icons the Supremes to jazz legend Jaco Pastorius.

“We’re generally a rock store, but I carry a bit of everything,” Gallagher said. “To me, good music is good music. I’m excited to see some cool stuff that ranges from punk like the Dead Milkmen to the iconic, like Ringo Starr and Gladys Knight. We’ll have what you’re looking for here.”

However, supplies are limited. “That’s why it’s not a bad idea to get here early,” Gallagher said.

Gallagher stocks about two or three copies, but makes exceptions on some artists and has four or five albums.

The same goes for the Long Ear, a Coeur d’Alene record shop, which opened in 1985.

“Record Store Day in April is our busiest day of the year,” Long Ear owner Terry Borchard said. “But Black Friday Record Store Day is a really good day for us. Our big day way back when was Christmas Eve, but now it’s the day after Thanksgiving. It’s not like people are getting up at 4 a.m. going to Walmart to buy a television, but if you’re a music fan, this is your day.”

Long Ear has ordered 235 new titles for Friday. “The albums will go whether they’re popular or if it’s an obscure thing finally released on vinyl or if it was only released on CD and now it’s finally out on vinyl,” Borchard explained. “We’ll have what you need, and the good thing is that you’ll likely get it, since we’re not a big city.”

Gallagher concurs. “We’re not Seattle or Portland since we don’t have a population like those cities here in Spokane,” Gallagher said. “You can even arrive a little later in the day and you should still be able to get what you’re looking for.”

Black Friday for Record Store Day isn’t just profitable for shop owners. “Some people come in and buy albums and sell them on eBay,” Gallagher said. “You’ll see prices skyrocket on eBay with some albums since it’s about supply and demand. There’s so many reasons to come in for Record Store Day. It’s a good time.”

However, the party atmosphere at the dawn of Record Store Day no longer exists. “We used to make it into a big event,” Gallagher said. “We had local recording artists, two or three bands here. They would give us a lot of freebies. There were snacks. It was a fun day. It was a much bigger experience, but then COVID took the wind out of it. But we’re bouncing back. It’ll be fun. Who in this business isn’t excited about Record Store Day?”

“I’m not too stoked about the Record Store Day reissues,” Rison said. “I was going to get the Karate 5 LP package but I passed on that. To me, every day is record store day or it should be. This Record Store Day will be business as usual.”

Rison wishes there was a product like Taylor Swift’s seven-inch, “Me!,” which was much sought-after during April’s Record Store Day. “That was a limited edition that went quickly,” Rison said. “There’s nothing like that which will be released on this Record Store Day.”

However, Gallagher believes there is always one album out there everybody wants for Record Store Day. “There’s always something new or something old that is now new that you have to have, and for me it’s the Beatles ‘Revolver.’ And for that all I can say is, ‘Thank you, Beatles.’ For me, I can’t help spending money on the Beatles since I’ll never be able to pay for all of the pleasure they gave me.”