The five artists selected for Adelaide Contemporary Experimental’s year-long residency program are now exhibiting their work, so we’ve asked Dani Reynolds, Ash Tower and Chelsea Farquhar how their time at the arts institution has influenced their practice.

Adelaide Contemporary Experimental’s annual artist residency returned in 2022, with work from the five artists selected by guest curator Megan Robson now on show at the gallery.

With the public now able to see the results of the year-long residency program, we’ve caught up with a few of the artists to find out how their time at ACE has shaped their practice and career.

We’ll be doing this in two instalments, so read on to hear from Dani, Ash and Chelsea. 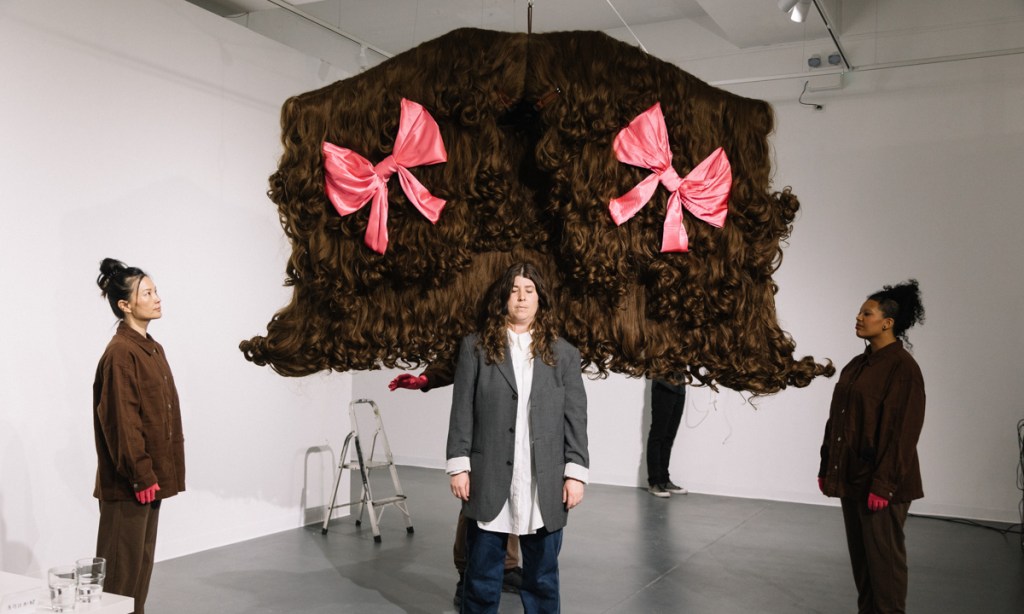 Describe the work you’ve created for the Studios: 2022 exhibition.
World’s Widest Wig Work commenced publicly with an event on the 12th of November, whereby I attempted to secure the Guinness World Records title ‘Widest wig.’ The record was held by Drew Barrymore, who gained the title live on The Tonight Show Starring Jimmy Fallon in 2017.

This event was structured by the strict and comprehensive evidence requirements of Guinness World Records. I presented and modelled the wig in a public space for the first time, where select officiates (a land surveyor, special counsel and wig specialist) observed the registered record attempt and judged the hairpiece on its fabrication, materiality and width.

As per the guidelines, the entire record attempt was documented in detail through videography and photography; this documentation, along with the independent witness & surveyor statements and an extensive list of required evidentiary material will be compiled and sent off to GWR for formal review.

Following the record attempt and for the remainder of the exhibition, the wig will be set on a specially designed large wig stand and accompanied by video documentation of the attempt.

How has the ACE residency influenced the work you’ve created?
Dedicated studio space has been fundamental to my ability to create this work. Having the opportunity to work with guest curator Megan Robson, as well as the chance to exhibit my work in the ACE gallery, propelled me to want to deliver an ambitious project, knowing that the momentum generated from this opportunity could directly impact the next few years of my career for the better. Access to an incredible exhibition coordinator like Brad Lay has also expanded the potential to deliver the kind of installation presentation I want to with confidence and ease.

How has your practice developed in your time at ACE?
The “professional” aspects of my practice – that is, the business of being artist – is probably what has been put to the test and developed over the course of the year. Meeting visiting curators, working with a writer, and working closely with a curator toward an exhibition outcome has all been new for me. 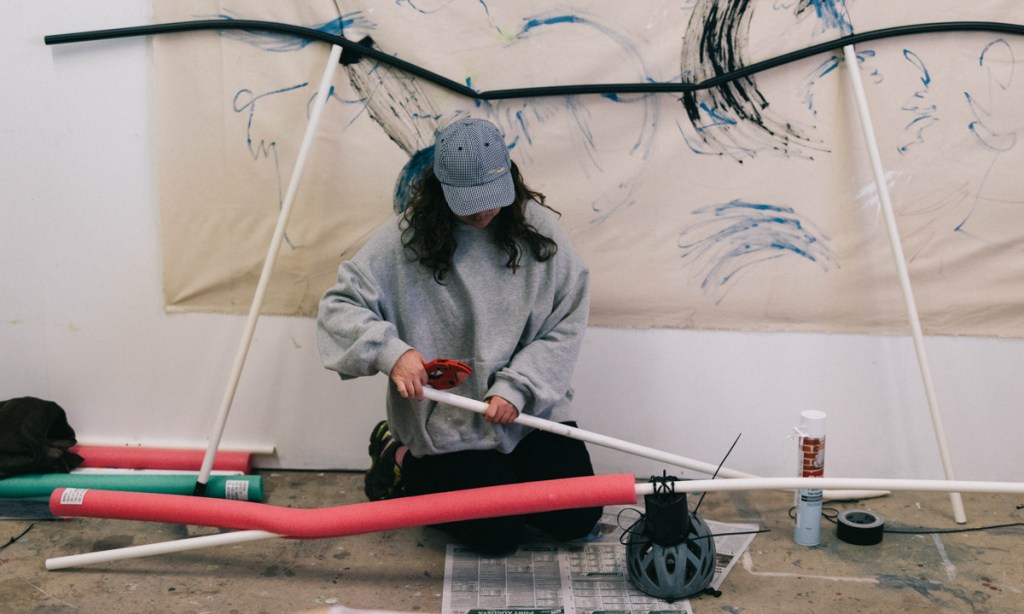 Did the other artists in the program influence you during the residency?
Working around others in a studio space and incubator style program means it’s near impossible not to influence and be influenced by each other. We each have distinctly different practices and approaches, but there has been so much care and investment in each other and our projects. From advising on a particular key colour choice, lending a sewing machine, recommending people for my creative team, debriefing a hard moment or sharing a meal together, the other studio artists have all contributed to my experience of the residency and final work.

What’s next for you?
This question feels exciting to be able to answer because I’m off to Clermont-Ferrand, France, for the Artistes en résidence 100-day residency program, followed by further Guinness World Records project research in Denmark and London! This upcoming six-month period dedicated solely to my practice feels like a once-in-a-lifetime opportunity for me that I’m incredibly grateful to have and excited to be anticipating. 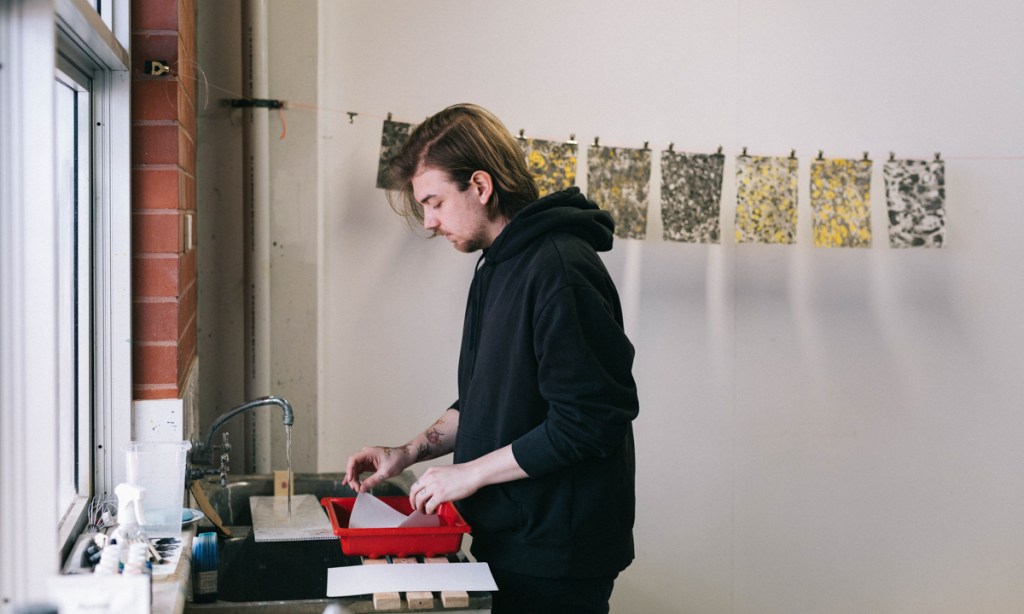 Describe the work you’ve created for the Studios: 2022 exhibition.
The work that I’ve made for Studios: 2022 draws on a number of historical references, from architecture, archaeology, and technology. I’ve been researching the history of atomic technology and incorporated this research into objects that are typically associated with funerary architecture—tombs, mausoleums and spaces which contain religious relics. The resulting sculptures and drawings synthesise some of the religious references recognisable in churches or cathedrals alongside some of the aesthetics we associate with technology and modernity.

How has your ACE residency influenced the work you’ve created?
The ACE residency has given me a lot of time and space to think about this new work, as well as provided opportunities for feedback as it came together. My work often begins with long periods of research, and meeting other artists and curators through the ACE Studio Program has deepened the work through discussions and other opportunities.

How has your practice developed in your time at ACE?
I feel much more settled in my practice since starting my time at ACE, and I look forward to spending more time on the projects I began here. The situatedness I feel at ACE has enabled me to think about my practice in a longer timeframe, emboldening me to iterate and refine work even further. It’s also been a great experience seeing how a nationally significant institution like ACE operates, and getting a taste for that higher tier of institutional arts practice. 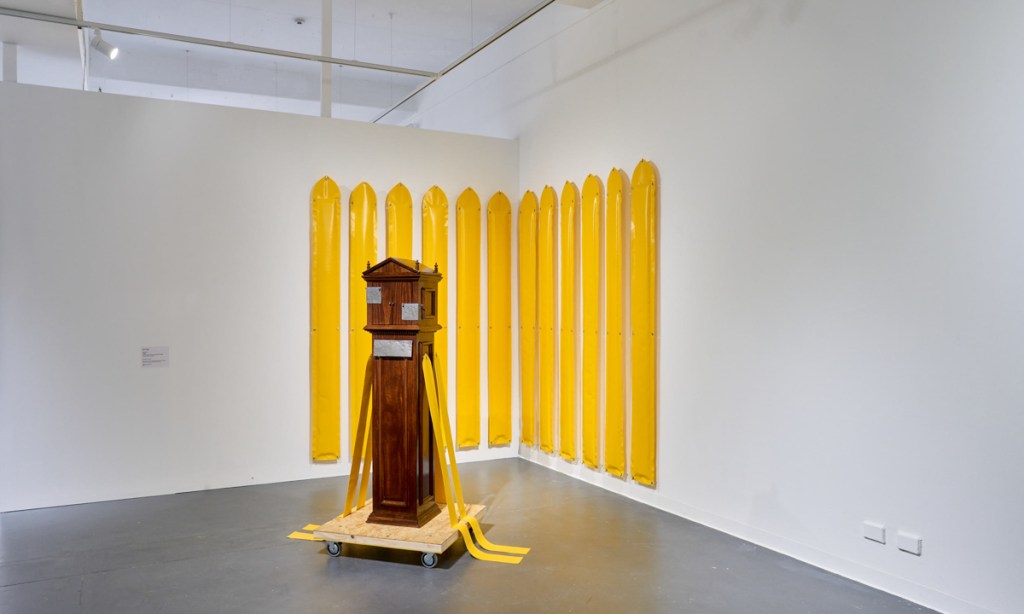 Did the other artists in the program influence you during the residency?
Sharing a studio with the other artists has broadened my understanding of different practices and approaches. I’ve benefited from watching the other artists solve problems, make decisions, and offer advice (and it’s also been great getting to know them as people). While everyone’s practice is quite distinct, I believe the work in Studios: 2022 will be having interesting conversations across the gallery space.

What’s next for you?
I look forward to continuing to develop out this work that began at ACE. Moving forward with some of the relationships I’ve developed over the course of the year, I’m keen to refine my work even further. 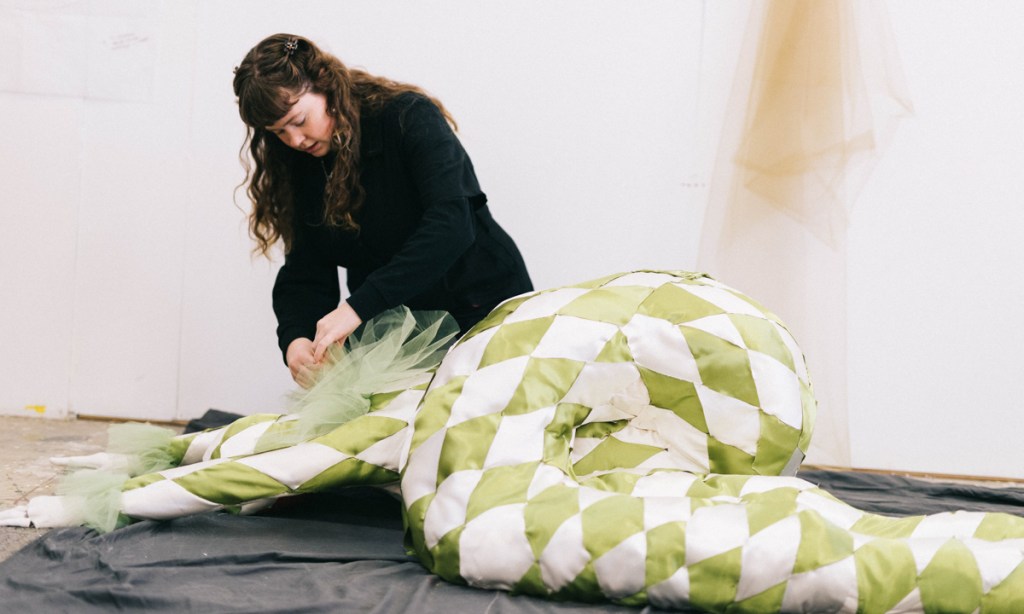 Describe the work you’ve created for the Studios: 2022 exhibition.
I have created an ambitious collection of objects that explore risk and histrionics. Inspired by the glamour and danger of the early 1900s circus, these works are playfully absurd and melancholic.

How has your ACE residency influenced the work you’ve created?
This body of work is the most ambitious work I’ve ever made. I have pushed my technical skills casting large body parts, undertaking a lot of intricate beading and textiles as well as making large and detailed leadlights.

How has your practice developed in your time at ACE?
I’ve refined my skills, reimagined what my practice could look like and made a body of work that would not have been possible without the studio and support provided by the ACE team. 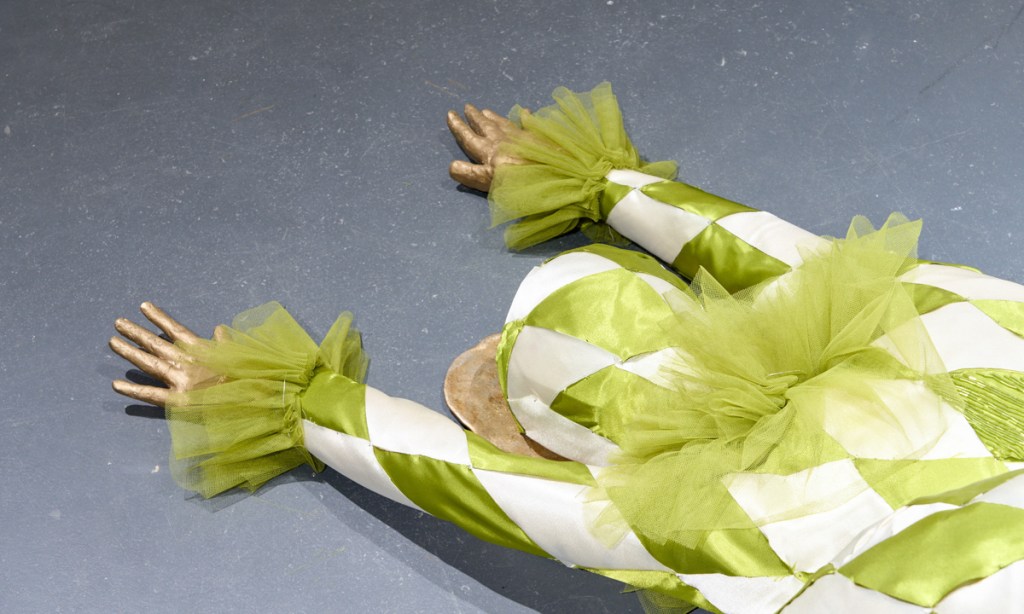 Did the other artists in the program influence you during the residency?
The other studio artists have been so generous with their support, advice and knowledge. I feel very lucky to have shared this opportunity with all of them.

What’s next for you?
I’m going to have a little break and then I’m jumping back in with a couple group shows interstate and locally in 2023.