South Korean shipbuilder Samsung Heavy Industries completed a successful demonstration of its autonomous navigation technology using a 9,000-ton university training vessel sailing over 500 nautical miles in Korean waters. The trial came just days after rival shipyard Daewoo Shipbuilding & Marine Engineering also tested its autonomous navigation system using a small boat in coastal waters. The Korean government and the shipbuilding industry are placing a high priority on the development of the technology as part of its efforts to develop a new generation of high-value ships.

“The success of this demonstration is a meaningful achievement that confirmed the performance and operation stability of SAS in real complex maritime situations,” said Kim Hyeon-jo, head of Samsung Heavy Industries Ship & Marine Research Center. “As a first mover of technology, we will fulfill our role and responsibility in preparing safety laws and systems along with technological innovation.”

Samsung reports that its Samsung Autonomous Ship (SAS) system was deployed with special permission from the Ministry of Oceans and Fisheries aboard Mokpo Maritime University’s large training vessel. The Segero is a 436-foot long vessel built in 2018 for the university. It accommodates 239 people providing a broad range of training facilities.

The demonstration began on November 15 and was carried out over four days sailing from the southern city of Mokpo. The training vessel sailed a total of 512 nautical miles traveling to Ieodo, a submerged rock formation nearly 100 miles offshore, and Jeju island in the South Sea (East China Sea) and then proceeding to the east to Dodo in the East Sea (Sea of Japan) to test and verify the operations of the autonomous navigation system. 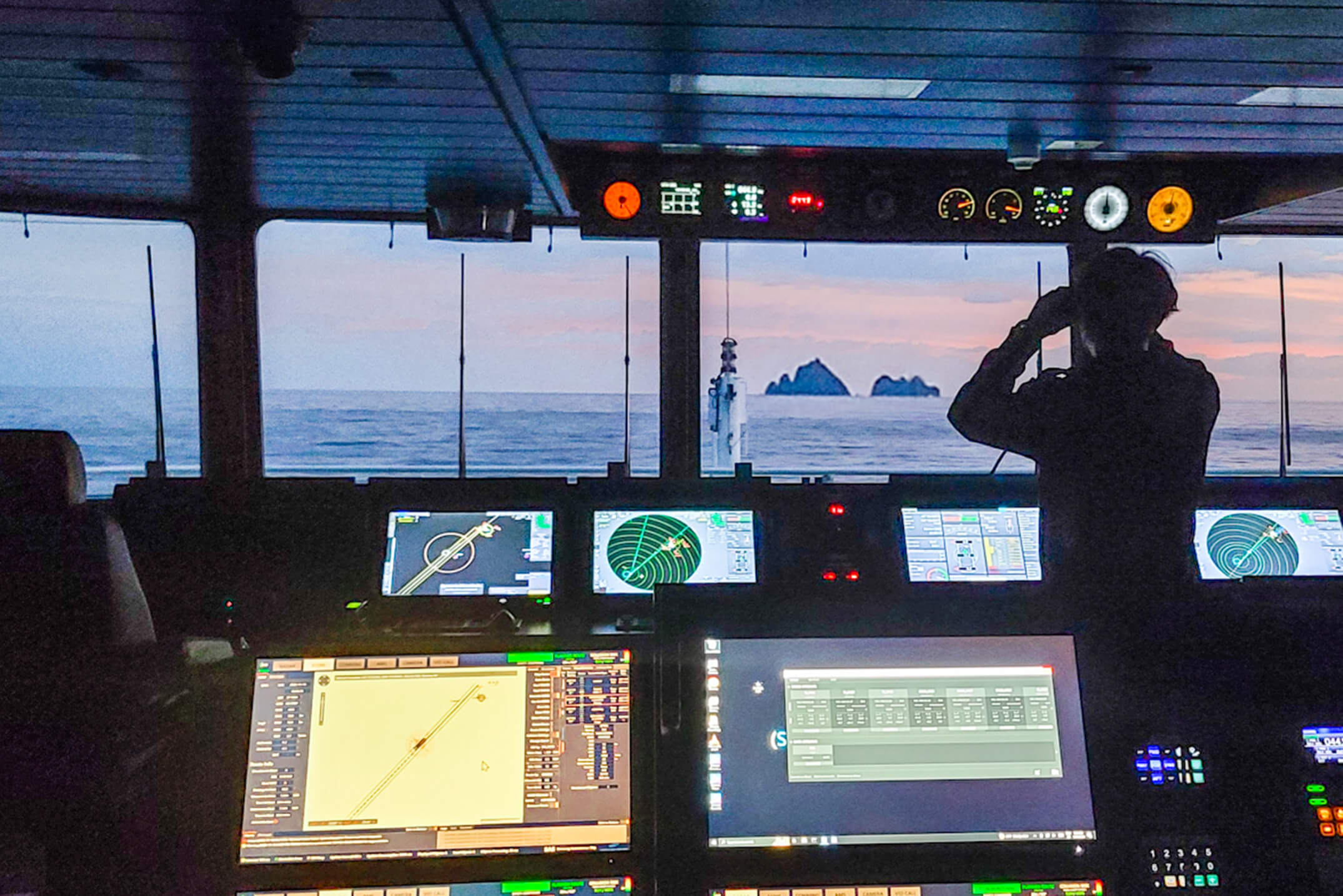 Bridge of Segero during the autonomous navigation demonstration (SHI)

The Segero equipped with Samsung Heavy Industries’ remote autonomous navigation system, succeeded in safely avoiding 29 collision risk situations encountered with other ships during autonomous navigation. The shipyard points out that it encountered an especially challenging area when passing in the vicinity of Ieodo, where maritime fishing is active. The system recognized in real time a complex collision situation with several fishing boats approaching from the bow and starboard side at the same time. The SAS system recalculated and established an accurate and safe avoidance route every five seconds.

Samsung reports that it was the first company to receive approval from the Ministry of Oceans and Fisheries for the demonstration of autonomous navigation systems in this setting. According to the company, currently there are no safety regulations that allow autonomous ships to be operated at sea. Working with Mokpo and the Korean Register, they developed operational guidelines. This included a risk assessment, identification of risk factors, and development of a risk management plan, which was reviewed and approved by the ministry.

South Korea’s shipbuilders are working to develop the new systems which integrate artificial intelligence, the Internet of Things, big data, and sensors to develop systems capable of operating the next generation of ships. Hyundai conducted a test during a Pacific crossing with a gas carrier while DSME conducted a test last week using a small boat along the coast near Seoul. DSME plans to test its system on a larger ship in 2023 while it targets introducing the system commercially by 2025. Hyundai is moving forward with its first version of its technology planning to introduce it for recreational boating in 2023.

Google Quietly Releases the ‘Switch to Android’ App for iOS; Get It Right Here!