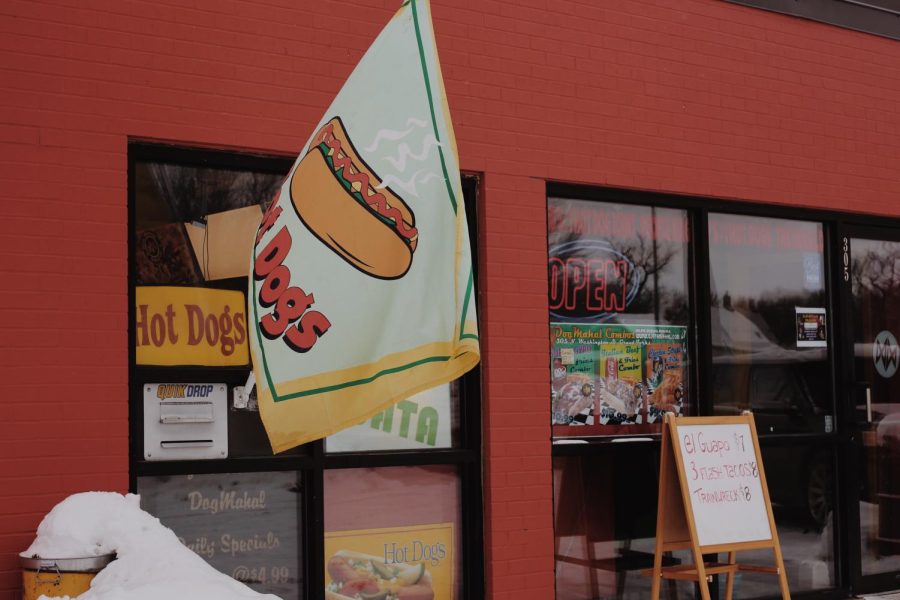 With records to my right and comics to my left, my friend and I entered Ojata Records for the first time. It was smaller than I thought it would be with crates upon crates creating a narrow pathway from the hotdogs in the back to the stage in the front. The record store felt smaller than before with the two of us in the building. I felt that uncomfortable feeling of “do I belong?” whenever one enters a new place.

We wandered the narrow shop looking for anything shiny to occupy us until the music started. A group of 30 to 40-year-olds sat chatting happily as we thumbed through the 25 cent records. Frank Sinatra smirked from his $64.99 album record as we examined the more modestly priced “Catholic Girls’ Choir” album. We did not mind though as we were saving our money for something special.

Facebook said “LIVE MUSIC,” and if you scrolled a bit further down the page, it said “GRAND FORK’S BEST HOTDOGS.” What hot-blooded young woman could resist? It was obviously worth every penny to taste the $10 Mr. Roper, which was a hotdog with BBQ brisket on top, or the similarly priced Super Gyro, which was a gyro with the most delightful shawarma.

But what was live music? In a more whimsical sense, I imagine that it could be something like music that was alive. As we sat down at the 50s-style booths, I began to feel the strums of the guitar in my chest. Louder than my own heartbeat, adrenaline rushed through me at the sound of the drums rising to a crescendo. The dim stage began to pulse with color with the spotlights matching the drumbeat. The small records store exploded with life.

I asked my friend for 3 words to describe the store and she said, “funky, groovy, and… I will have to think of a third.” It was hard to describe the vibrant records shop because, well, it was shifting. A punk couple and their child laughed with the older woman cooking their hotdogs. A man swayed to the music still dressed in his work clothes. A fog machine billowed out a thick haze, and I swore I could almost see into the past by the way the lava lamp and Billie Holiday’s smile gleamed in the corner of my eye, the present when my friend pushed against me in the dense crowd, and the future of the sci-fi books piled up in a precarious stack.

Later that evening, the lead singer hugged the older woman at the back of the shop. She smiled and apologized for the random 30-second power outages that they had to play through. Next time, she promised they would have it fixed. For some reason, that surprised me. I had felt as if this place was something I had accidentally stumbled upon and never to find my way here again. A slice of the past was lost to my future, and as I hugged my friend goodbye, she asked if there would be a next time for us. I said yes wholeheartedly.

Ojata Records and Comics is a retail shop within the hotdog shop DogMahal DogHaus. Located at 305 N Washington Street in Grand Forks, ND, these shops boast a wide selection of live music, specialty hotdogs, and merchandise. For the latest updates, follow them on their Facebook pages.

Kira Symington is a Dakota Student General Reporter. She can be reached at [email protected]

Gustavo Dudamel Wants to Take Classical Music Off Its Pedestal