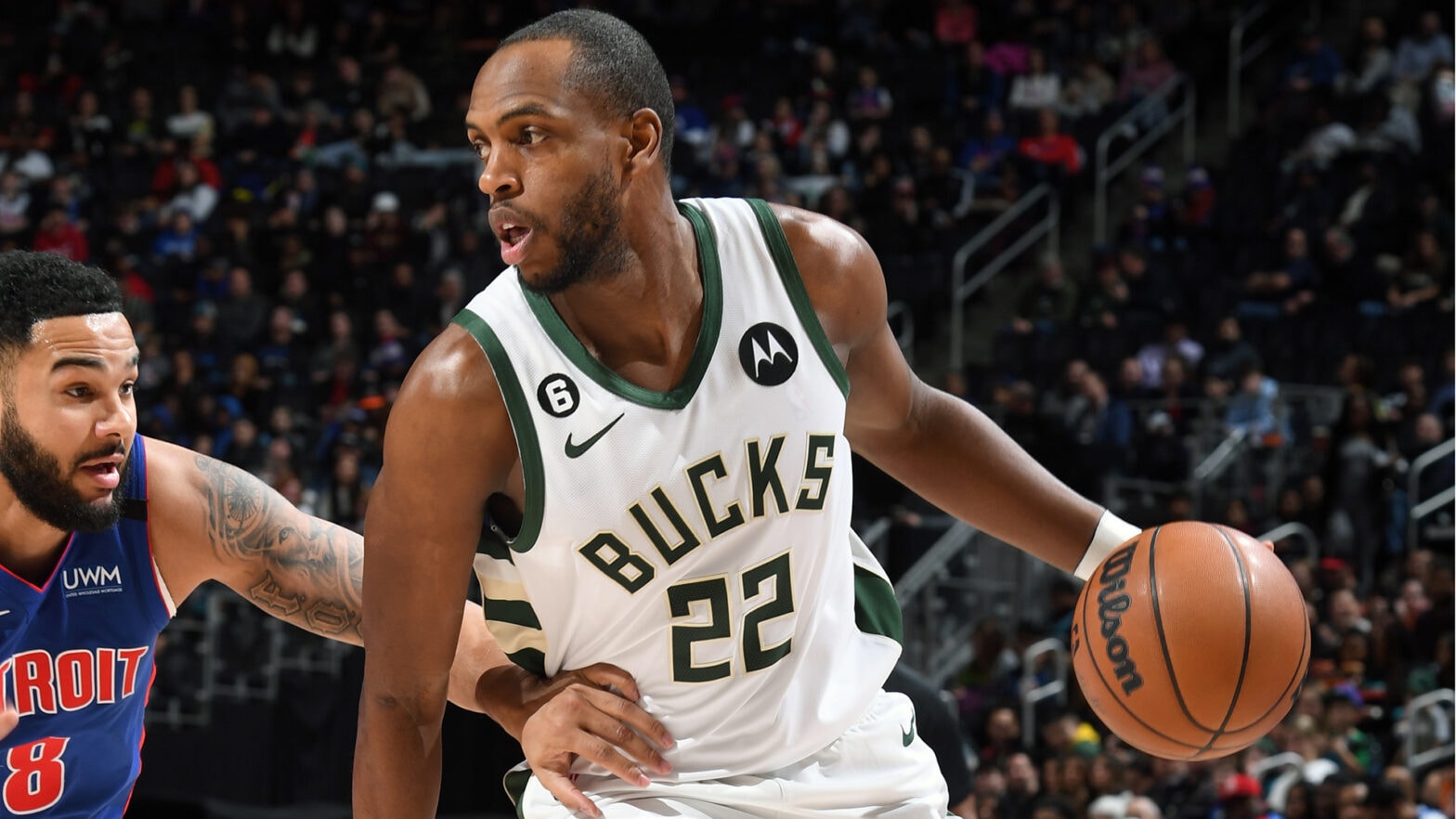 Khris Middleton made his return to Bucks on Monday against the Pistons.

MILWAUKEE – Given how fickle the NBA’s injury gods can be, Bobby Portis probably should have avoided the topic of health altogether.

On Monday morning, the Milwaukee Bucks’ animated big man was talking on the phone about his team’s suddenly rosy outlook, what with Giannis Antetokounmpo and Khris Middleton finally available again for that night’s game at Detroit.

“If we can get those guys back, it’s going to be good,” Portis told NBA.com. “Getting everybody back in their normal roles, getting back our chemistry and camaraderie that way, and trying to get some wins will make everything better.”

That evening, Portis seemed to be doing fine by all reports as he left the visitors’ dressing room at Little Caesars Arena, not hampered after a Pistons player fell into his right knee.

By Tuesday, Portis was listed as OUT on the injury report with a newly sprained knee.

And so it goes for the Bucks, whose championships aspirations continue to be hindered by injuries to key members heading into the final three months of 2022-23.

Getting and staying healthy has forced a freshness on this team, opening opportunities up and down the roster as coach Mike Budenholzer and his staff have covered for absences. That’s nothing especially new for Milwaukee or many other teams. But it also has kept the Bucks’ full potential on a leash, and it doesn’t take great recall to appreciate what that means.

Giannis Antetokounmpo and Khris Middleton both return from injuries as the Bucks put together a dominant 150-130 win over the Pistons.

It was only last spring that Middleton wrenched his knee against Chicago in the first round of the playoffs. That was it – without the smooth veteran wing, the Bucks did not have enough to survive against Boston in seven games in the East semifinals. Their 115.5 scoring average was bound to fall anyway, but it went all the way to 97.7 without Middleton and his nightly threat of 20 points or more.

Well, the 31-year-old appeared in only his eighth game Monday. He missed the first 20 recovering from offseason wrist surgery, then 18 more with right knee soreness. He looked rusty against the Pistons (eight points, six turnovers in 15 minutes) but at least he was back. And the Bucks won 150-130 with a fully healthy roster for the first time this season.

The situation was made worse by Antetokounmpo’s absence from Jan. 11 until Monday with left knee soreness. He has missed 11 games so far, on pace for about 62 appearances and on par with what he has played in each of the past three seasons.

Now if that’s just pacing in preparation for the playoffs, no problem. Antetokounmpo’s postseason workload has been robust, before and after that scary hyperextended knee in the 2021 East finals against Atlanta. But without his wingman Middleton so often lately, with other pieces rising or falling less predictably, this season has been one of mixed results and a little slippage.

Their shooting, both overall and from 3-point territory, is down, and their turnovers are up. Defensively they rank third (110.4) and they are up in rebounds and blocks, in part due to Brook Lopez’s regular presence after a mostly missed (back) 2021-22.

But the most glaring issue has been Middleton’s unavailability. It’s no stretch to say that as he goes, so goes what’s to come of the Bucks’ ambitions.

Who’s in position to move up and who needs to be worried as the NBA moves past the halfway point?

Asked to define this season, Portis said: “Not having our second-best player for most of the season. He’s a big part of what we do, running different plays, different sets. Most of our offense is built around him and Giannis.”

Point guard Jrue Holiday papered over some of that recently. In a six-game stretch without either of the offense’s No. 1 or No. 2 weapons, the 32-year-old Holiday averaged 27.2 points, 4.5 rebounds and 9.0 assists. That level of play reaffirmed the value his teammates and coaches see daily while earning him the East’s Player of the Week honor.

“Obviously he sees that we need more scoring,” Portis said. “But he still does a good job of getting everybody involved. He’s a two-way player as well, being able to guard the opponents’ best players well. But I don’t think he gets enough credit for what he can do with the ball. Goes both ways, both hands. Step-backs. He hits clutch shots for us, and is just a helluva basketball player through and through.”

For all the respect he gets around the NBA, Holiday has been an All-Star just one time: Ten years ago at age 22. He stepped back again Monday in Detroit, taking just 12 shots and scoring 16 with the Bucks’ big guns on the floor again.

Then there’s Portis himself, stepping back to a bench role after starting a career-high 59 times last season while Lopez was out. He is – or should be – a legitimate candidate for Sixth Man of the Year, potentially only the second double-double man in the award’s 40-year history.

“I get it, man, we play in Milwaukee,” Portis said. “Most cities, most guys don’t really care about what we’ve got going on.”

Much of what the Bucks have going on through mid-April will depend on Middleton’s return to form and Antetokounmpo’s freshness. The potent play at Detroit had the arrows pointing up.

“That doesn’t mean we’re going to score 150 every single night,” Antetokounmpo told reporters afterward, “but once we’re at full strength, this team is really good. There’s a lot of threats out there. People understand their roles. As long as we can stay healthy, we have a chance and that’s all you can ask for.”

Steve Aschburner has written about the NBA since 1980. You can e-mail him here, find his archive here and follow him on Twitter.

The views on this page do not necessarily reflect the views of the NBA, its clubs or Warner Bros. Discovery Sports.

Pakistan: WHO warns of significant health risks as floods continue