Kalamazoo has a large population of people from the Middle East, and it has a community of musicians who are experts at music from around the world.

Yet authentic Middle Eastern music played live was nonexistent in town before the Bahar Ensemble formed in 2017.

Ahmed Tofiq, cofounder and violinist of the Bahar Ensemble, points out that Kalamazoo even has several Middle Eastern restaurants. “We have food, but, okay, how’s the taste of music? What’s that like?”

It was a musical cuisine that he felt needed to be in Kalamazoo.

Now, nearly five years later, the Bahar Ensemble is like any local jazz or bluegrass, or folk band, with a performance at the last New Year’s Fest, many informal neighborhood shows, and a hit Blissfest set under its belt. 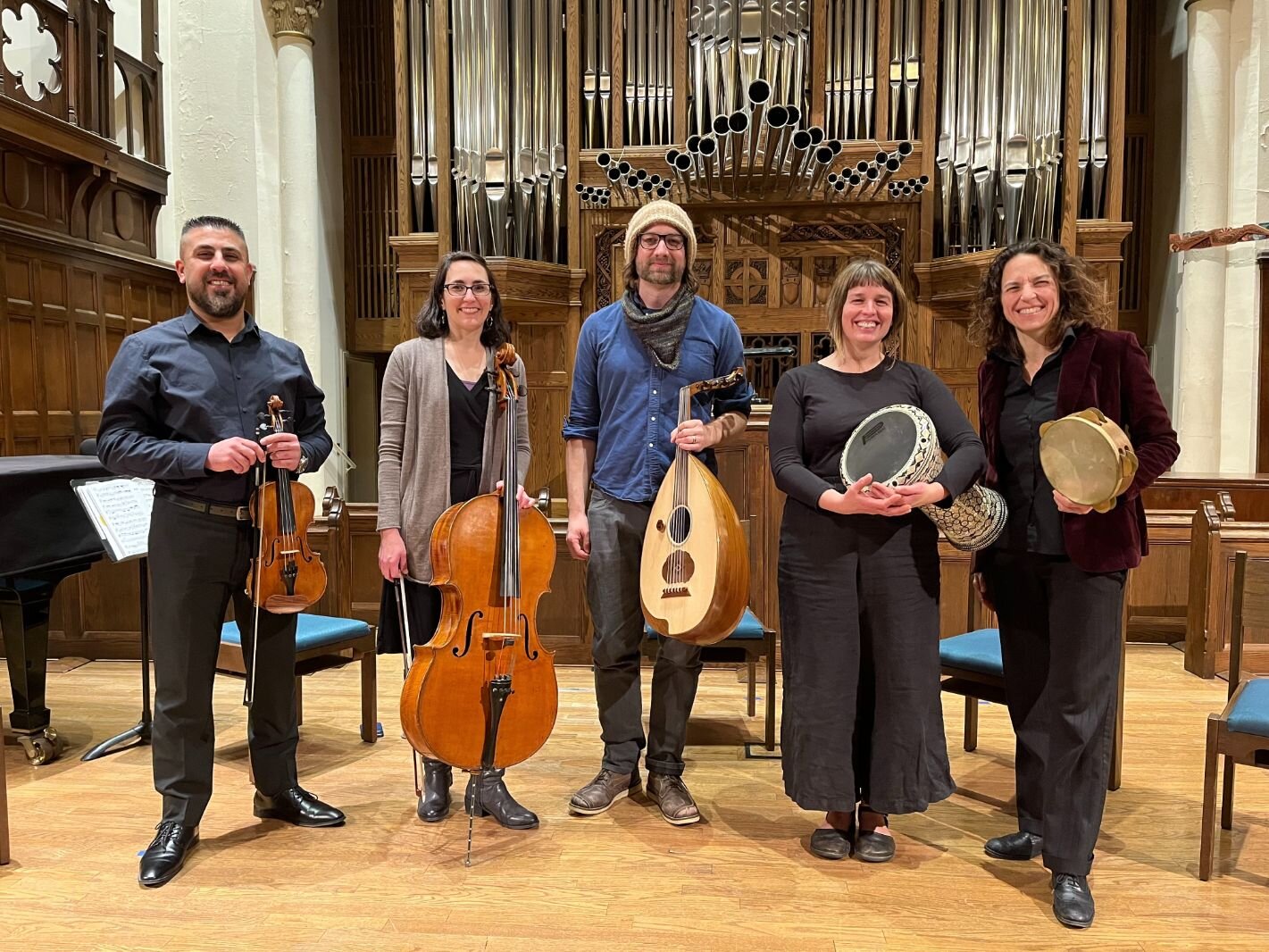 Oud player Beau Bothwell says, “Liz (Youker, cello) and I live in the same neighborhood (West Main Hill), and we played shows around there just for people’s house parties and different things, and have kind of become the neighborhood band. Which is really interesting, the neighborhood between the two colleges, the band that performs there all the time, is playing Middle Eastern music.”

Picture a West Main Hill yard: Percussionists Dede Alder and Carolyn Koebel create the rhythms of other lands on doumbeks or other hand drums, the string players lay improvisations of sweet yearning on top of that, and “all those kids (of the neighborhood) come out to dance,” Bothwell says.

“To them, it’s music,” Koebel says, “It’s the typical response.”

In 2019, the ensemble traveled up to the woodsy northern Mitten to play sets at Blissfest. The folk and roots festival is heavy on American roots, but Bahar was pure roots from another part of the world.

“It was amazing, people loved it,” Adler says. “When we get to a place where they haven’t really experienced it before, then they really freak out, and people get really excited about it — freak out in a good way.”

Tofiq came from Iraqi Kurdistan at the end of 2013, to earn a Master’s in Music at Western Michigan University.

He was both a student of classical music and the traditions of his homeland.

“I grew up with this,” Tofiq says of his traditional music. His father, cousins, and all of his extended family, didn’t have “the technologies we have” to hear whatever might be popular with the rest of the world.

“We were just listening to the style we had, and the style we had was all about this music. Most of this music, I learned back there.” Family and other musicians would gather to play and share new sounds, with openness, saying, “Okay, I heard this song, I’m going to share.”

Arriving in Kalamazoo, he thought, “I know something that I want to share with everyone.” So Tofiq and fellow Iraqi musician and WMU music student Bashdar Sdiq formed Bahar. 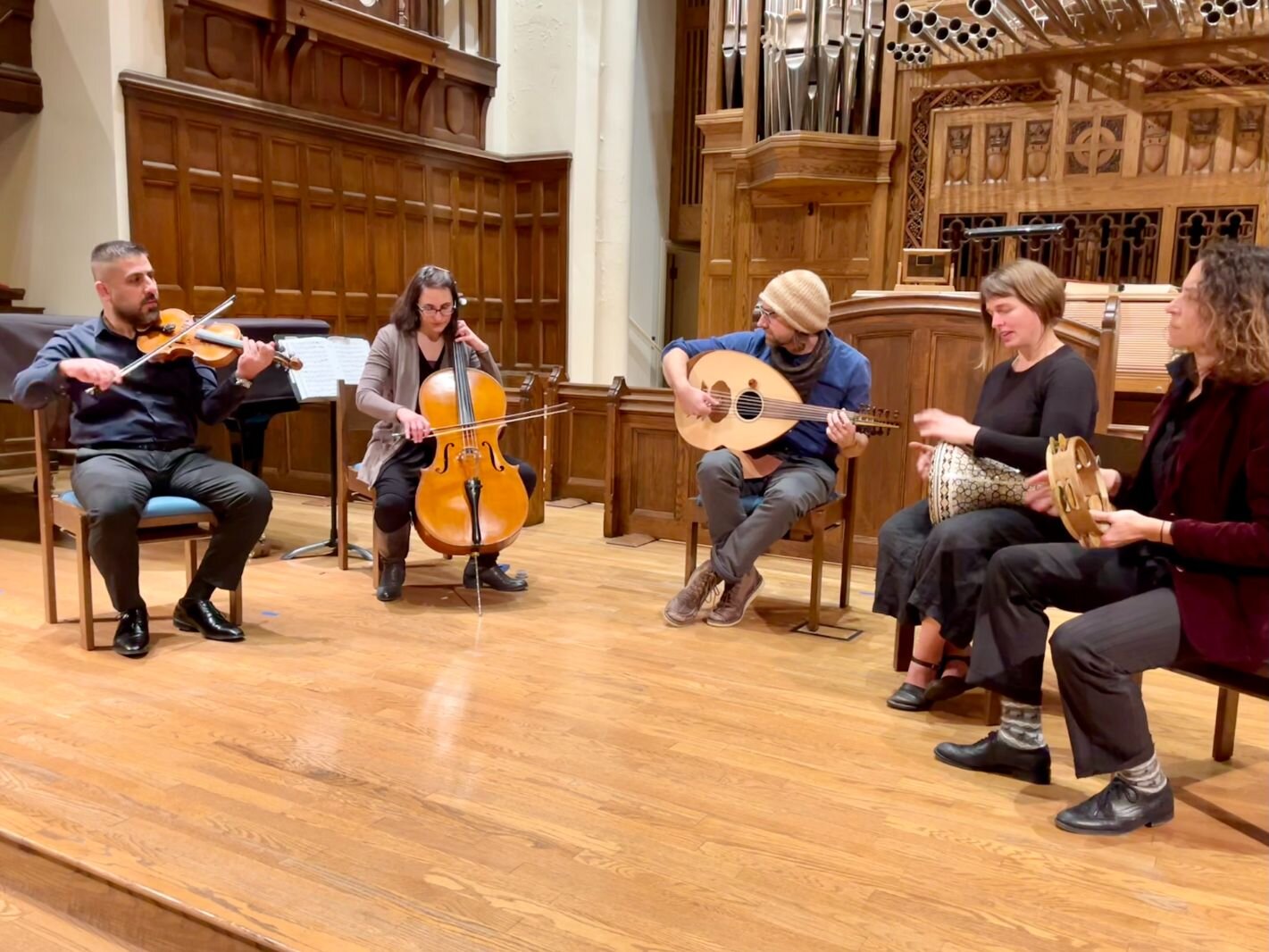 Bothwell picked the oud, a pear-shaped, fretless stringed instrument, a bit as an undergrad, he says, but then he got a chance to get more experience on the instrument when he joined Bahar at its beginning. Oh, yeah — he’s also Assistant Professor of Music at Kalamazoo College, an expert in ethnomusicology whose research is steeped in the music and culture of the Middle East.

Alder is an eclectic multi-genre singer and percussionist who became focused on Arabic drumming later in her career. The newest Bahar member Koebel has played various world music percussion forms for the past 20 years in Kalamazoo.

Koebel says, “This is really the expertise between Beau and Ahmed, with (Bothwell’s) ethnomusicology background and study, and then (Tofiq’s) cultural and ancestral legacy. There’s a reason you don’t hear this music played in this region and it is because you don’t have people with the expertise and the cultural integrity and knowledge.”

There might have been groups that can “hint at it,” she continues. “But if you got into the spirit and soul of this music, they don’t have the deep training and background to really understand the exquisite subtlety of improvisation” around the traditional rhythms. “Only really one of us is functioning at a high level at that. The rest of us, we’re students.”

Fifth Bahar member, cellist Youker, is the Director of Education and Community Engagement with the Kalamazoo Symphony Orchestra.

Her involvement came in when she and Tofiq wanted to provide a musical outlet for immigrant/refugee children. That became Orchestra Rouh, a collaboration between the KSO and the Suzuki Academy of Kalamazoo. 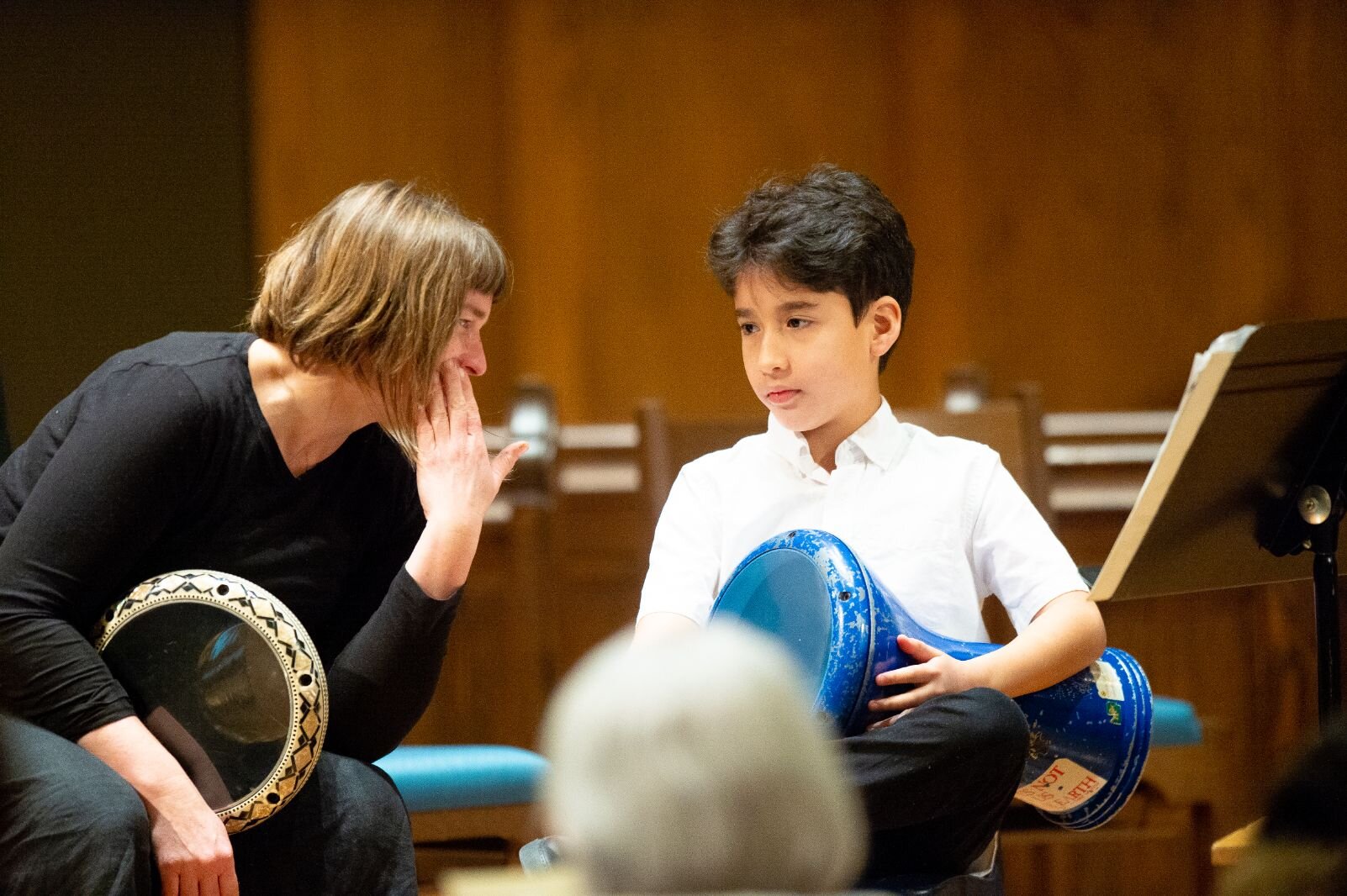 “The idea (for Rouh) came when the refugees, the Syrian families moved to Kalamazoo,” Tofiq says.

“My wife (Hend Ezzat Hegab, Arabic instructor at WMU) and I, we worked with them, by translating, taking them to doctors, grocery…. I saw many kids, they’re playing outside, they can’t join activities in school because they don’t know the language.

“I choose music because it’s a universal language,” he says. “You play music, and everyone will understand us, you don’t have to speak the same language. Just play music everywhere, like a bridge between the culture here and their culture, through music.” 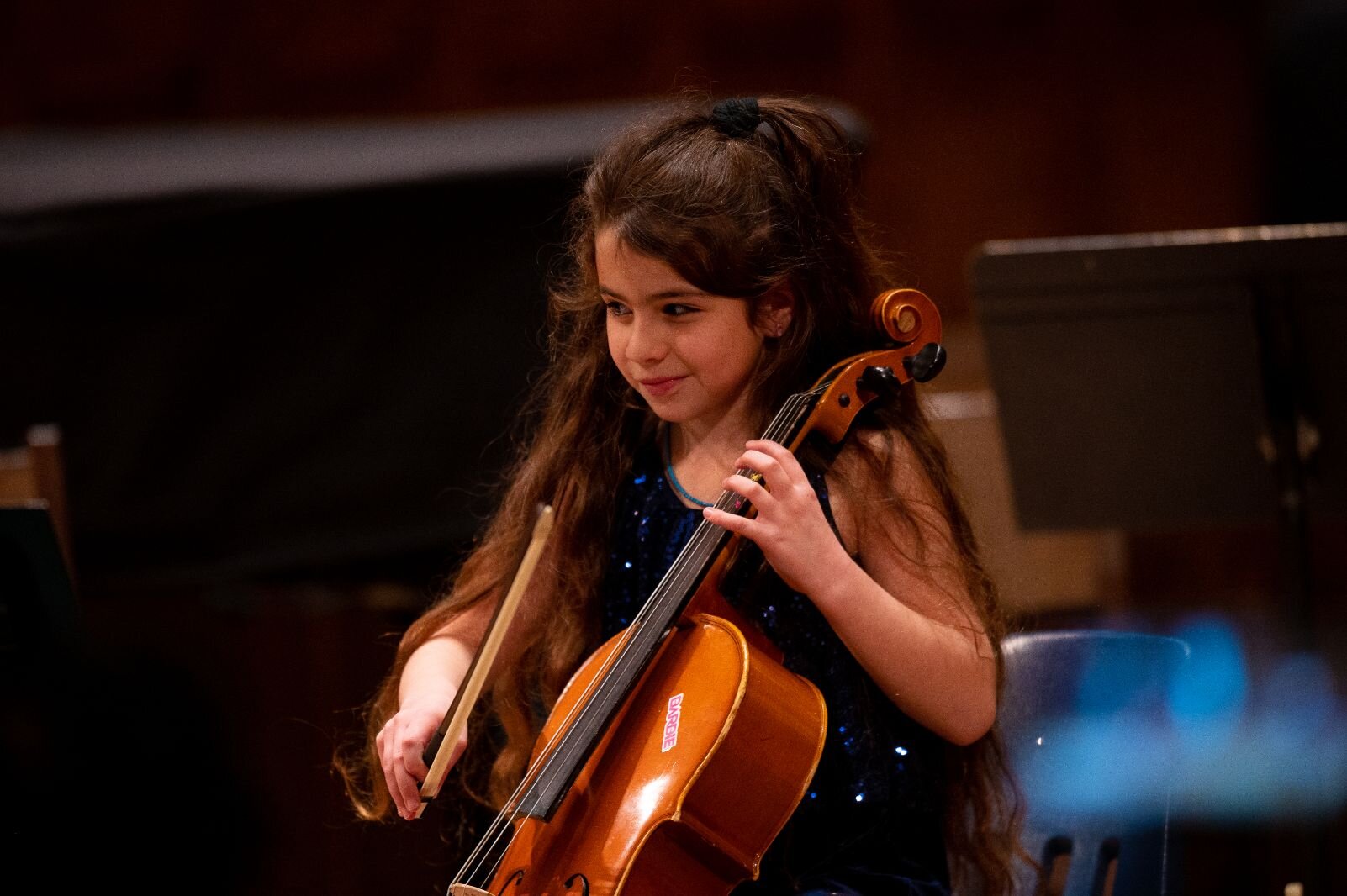 Orchestra Rouh recently performed at First Congregational Church in downtown KalamazooThey taught the refugee children how to perform, dubbed the new orchestra Rouh (hope, or spirit, in Arabic), and held concerts for the children’s new home.

“It was really great to see the families who had just come. Their kids were engaged in our program,” Alder says. “The parents would come, and the speakers would be in Arabic and English.” Rouh was “a bridge between their parents and the community. That was really powerful… The kids were involved, feeling accepted, these people (of Kalamazoo) seemed loving and kind.”

The children had been feeling lost in a new land, a different culture, and a different language, Youker says. “Being able to reverse that role a bit and being the presenter… It seemed that there was so much pride in parents seeing their kids perform on stage, music that was familiar.”

Bahar and Rouh often performed together, with the group of adults giving the young musicians an aspirational example.

Then, as we all had to, they had to go virtual. Rouh lessons continued online, Bahar rehearsed and did a few recordings.

It’s been a bit slow getting back up-to-speed, they say, but events are lined up for 2023, including a Bahar concert at the Milwood Magnet School in February, and at the Fretboard Festival in March. 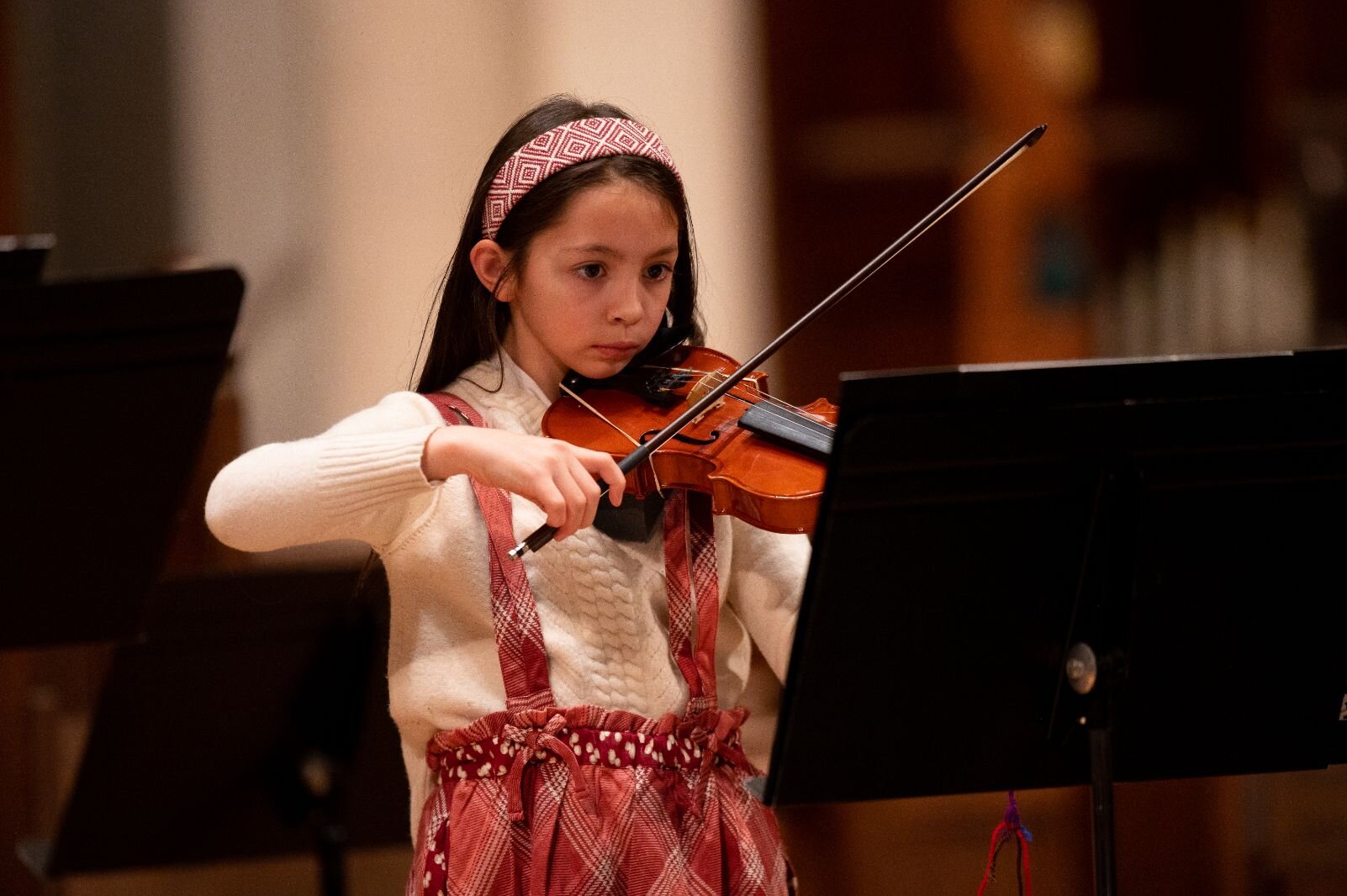 Orchestra Rouh, a training orchestra featuring Middle Eastern music, is sponsored by the Kalamazoo Symphony Orchestra and the Suzuki Academy.Just before speaking with Second Wave, members of Bahar provided support to an Orchestra Rouh recital at the Kalamazoo Nonprofit Advocacy Coalition Jan. 18.

Musicians from toddlers on up did their best at what for many was their first public performance. Some were of Middle Eastern heritage, some not.

Then Adler, Rouh’s percussion instructor, brought out the doumbeks. Two young musicians were clearly excited to slap out Arab rhythms. 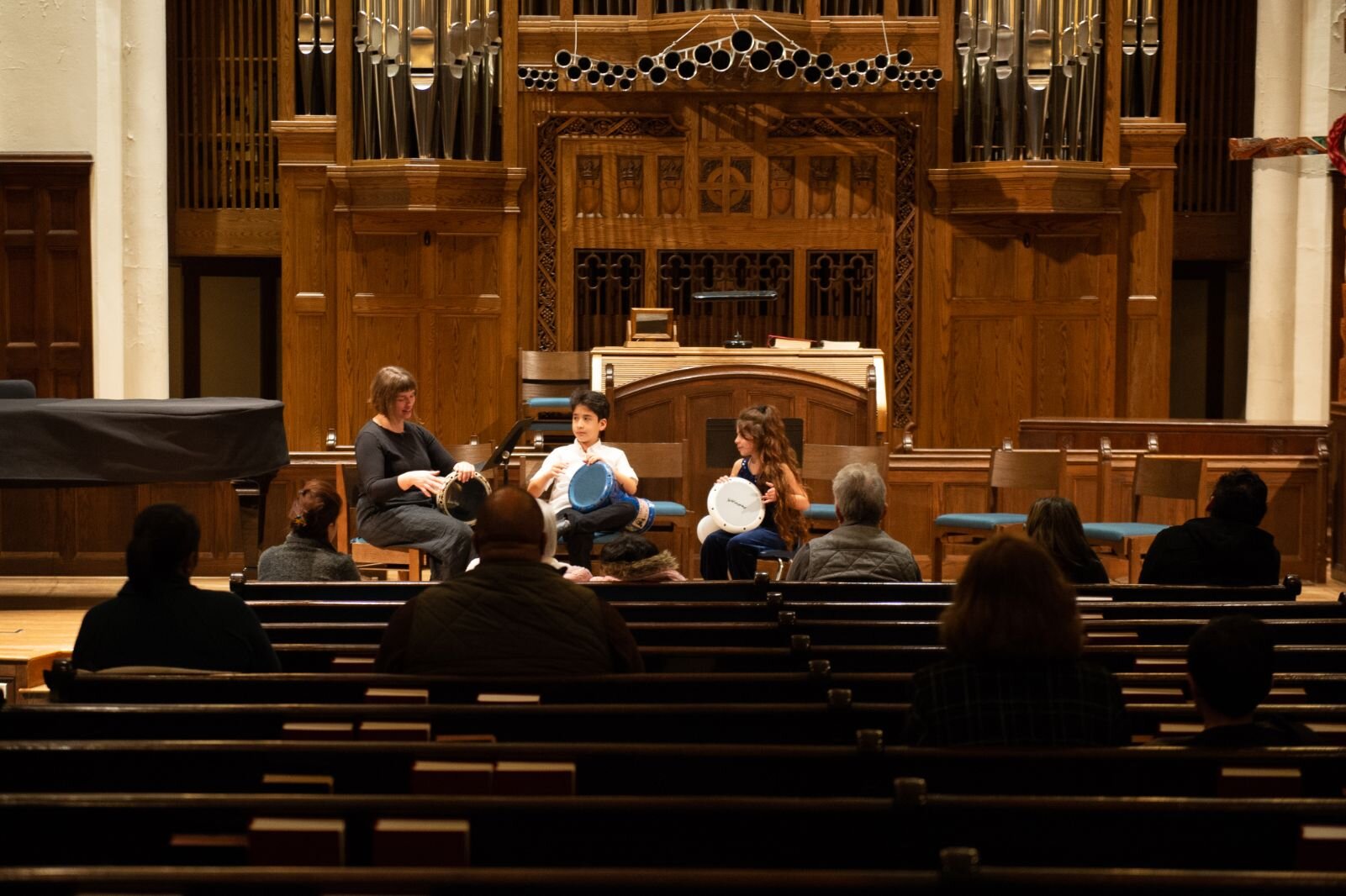 Orchestra Rouh recently performed at First Congregational Church in downtown KalamazooOrchestra Rouh has had to focus on the recital format instead of playing concerts as a group, but the program continues to grow. Since 2017, the young people who were original Rouh members have moved on, Youker says.

“Much like Bahar providing familiar music to our Middle Eastern community while introducing Kalamazooans to it, Orchestra Rouh is evolving to become more a space of cultural exchange,” says Youker.

“What originated as an insulated, culturally specific space where recently arrived students could feel safe, supported, and understood, has evolved with students’ needs, to be a place that brings together both immigrant/refugee children and a few of their American peers.”

YouTube Music tests letting you filter the Up Next queue