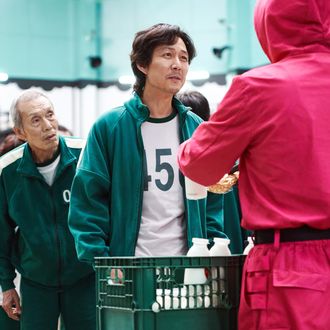 Squid Game: The Challenge is off to a cold start. Players for the competition series sought medical attention on January 23, the first day of production for the reality show inspired by the South Korean smash hit. According to The Sun, which first reported the news, an unconfirmed number of contestants needed medics after an intense cold snap left them freezing during a game of Red Light Green Light, while another player is believed to have injured their shoulder after running into a wall by accident. “Some people couldn’t move their feet because it was so cold,” a source told The Sun. “You could hear someone yell ‘Medic!’ and the crew would rush on. We ended up standing there for 30 minutes between takes.” Netflix, for their part, defended the conditions on set. “We care deeply about the health and safety of our cast and crew, and invested in all the appropriate safety procedures,” Studio Lambert, the Garden, and Netflix told Vulture in a statement. “While it was very cold on set — and participants were prepared for that — any claims of serious injury are untrue.”

Similar to the premise of the series it is based on, 456 players compete in children’s games to win a cash prize of $4.56 million. The first game was shot inside a former airplane hangar outside of London and was ravaged by well-below freezing temperatures; the crew and players were reportedly given hand warmers and thermal underwear. Unlike the scripted series, players do not fight to the death, though it may have felt like it while weathering a cold front, presumably under the watchful eyes of that giant robot doll.