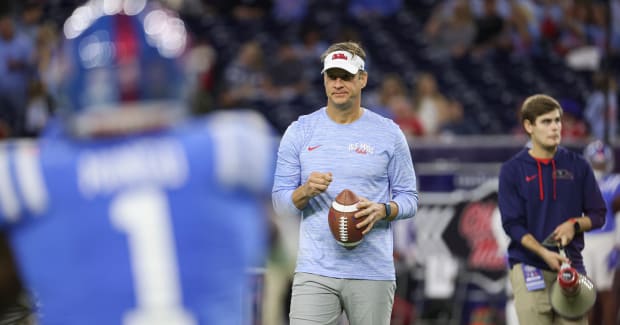 The spring semester is now underway at the University of Mississippi, and with a new year comes new challenges and expectations in the sports world.

The same can be said for the major sports at Ole Miss. Over the next few days, The Grove Report will analyze the current state of these teams in Oxford in a series of columns titled “State of the Program.”

Much like the president’s State of the Union address, these pieces are designed to lay out the general feeling surrounding a program here in late January. Yesterday, we analyzed men’s basketball, and today, we dive into football.

The 2022 season started well for Lane Kiffin’s Rebels, beginning with a 7-0 record and rising into the top 10 nationally. That start, however, was followed by a 1-5 finish down the stretch, including falling flat in the Texas Bowl against the Texas Tech Red Raiders.

Since the conclusion of the season, it’s been recruiting time for Kiffin and his staff, hitting the transfer portal hard after snagging some key prep signees like in-state star Suntarine Perkins.

One of the more intriguing trends for the Rebels out of the portal has come at the quarterback position. When Luke Altmyer transferred out of Oxford this offseason, it was widely believed that Kiffin would need to find his second string quarterback out of the portal when Marcel Reed flipped his commitment to Texas A&M.

That, however, is easier said than done.

Most players who enter the portal do so for a reason, one of which is that they want to see ample playing time at their new school. Kiffin went out and grabbed former five star Walker Howard from LSU, but his next signal caller snag has brought into question the starting quarterback position for 2023.

Spencer Sanders from Oklahoma State is planning to spend his final year of eligibility at Ole Miss, and reason would dictate that he hopes to win the starting job in a competition against Dart and Howard. This may come as a surprise to many considering that, although he was not elite in 2022, Dart was more than serviceable, and as a young quarterback, he was bound to improve moving forward.

Still, perhaps Kiffin’s idea was, “Why not bring competition to the quarterbacking room, and whoever wins the job will automatically be better because of it?” This battle for supremacy will be Ole Miss’ second in as many years this spring, and how it unfolds will likely determine what the quarterback room looks like in the fall, including if someone transfers out.

Shifting gears, Kiffin snagged another large get out of the “coaching portal” when he landed new defensive coordinator Pete Golding from the Alabama Crimson Tide. There was a time where Golding would have been a candidate for the head coaching position in Oxford, and the fact that he was willing to jump from Tuscaloosa to join the Rebels says a lot about what Kiffin is building, at least on the surface.

If Ole Miss hopes to get back into the 10-win conversation next season in a daunting schedule, it will need to be better defensively. That’s why Golding was brought in, and we will see if he can get the job done.

All-in-all, it’s always football season in the South, and the same can be said for Ole Miss. There will be plenty of storylines to follow throughout the offseason, and one thing is for sure: despite the lackluster finish to the season, the Ole Miss football program is in better shape than it has been in a long time.

Want the latest in breaking news and insider information on the Rebels? Click Here.