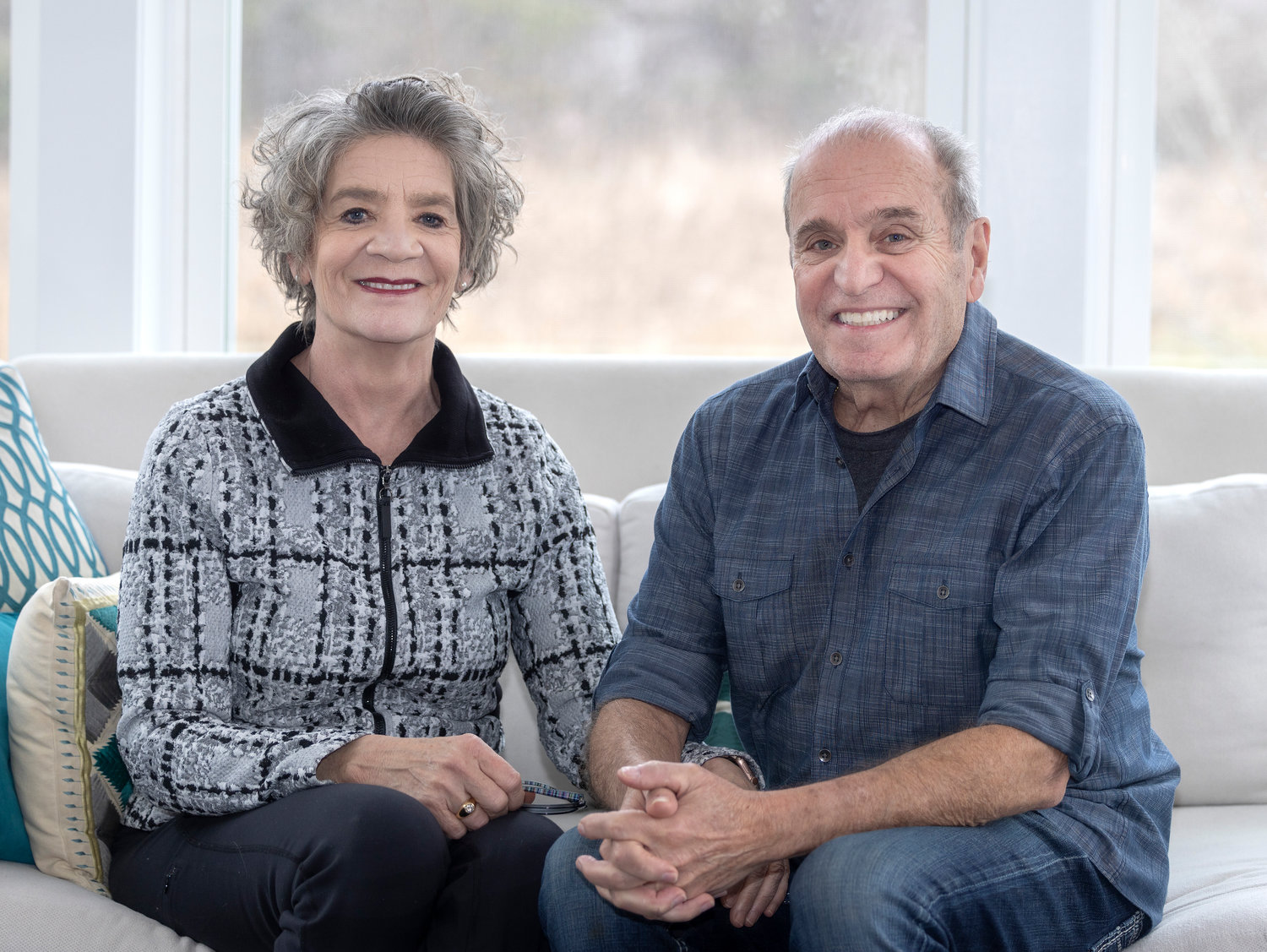 Standing at a window in her well-appointed condo in Bath Township, Linda Vail expresses her discomfort to the photographer.

“I can’t just put on a smile,” she said. “Not like some people. Give me something to laugh at.”

But Vail soldiers on, delivering a performance for the City Pulse photographer. She’s ever stoic, laser-focused.

It’s an ironic comment from the 61-year-old. She has deliberately put herself out to the media as the face of the Ingham County Health Department. The photo session may be one of her last media appearances. Next month, she’s retiring from the county after nine years running the department under the unassuming title of health officer.

Those who have worked with Vail know that behind her analytical, no-nonsense demeanor is a woman who built a space for herself as a leader in public health and life. They credit her performance during the pandemic as nothing less than life-saving.

“I know Ingham County would have had a lot more deaths had she not been here,” said Ingham County Commissioner Todd Tennis, who has worked closely with her as the chair of the committee that oversees the Health Department. “She saved lives. She was the right person at the right time.”

“She has the unique combination of bench skills and people skills,” said Renée Canady, whom Vail succeeded in 2014 to run the Ingham County Health Department.

There, she oversaw more than 400 employees, a budget of more than $50 million a year and a network of health centers — a big enough challenge even before COVID arrived in March 2020.

Building up to it

Vail reflected that the COVID pandemic took much more out of her than she recognized or perhaps cared to admit to herself. With death threats and middle-of-the-night phone calls to record COVID deaths to hammering state lawmakers into following public health orders, Vail was the face of fighting the virus in Mid-Michigan. But her work during the pandemic is just the surface of an extraordinary professional life that sprang from a childhood interest in science.

She recalls having a chemistry set, a rock tumbler and a rock collection. Before graduating from high school, she built and launched a weather balloon.

Her love of science was something her father, Tom Vail, nurtured.

The two loved spending time on logic puzzles, she said.

“We both enjoyed them. It’s like, ‘Oh look, a good, juicy logic problem.’ So, he definitely had a sense for logic and science and math,” she said. “He was just brilliant. I mean, he could convert miles to kilometers, grams to ounces — things an instant in his brain. That was my dad in a nutshell.”

Tom ran a construction business, mostly doing painting as a subcontractor with his brother, Jim. He decided to retire early, at 51. He eventually came out of retirement to do contract work helping to design interiors for large box stores.

The dad she recalls most fondly was also a man who taught his daughters to play card games.

“One of the things we played was pinochle. It’s a complicated game.” She said the two were so merged during the game that they could read nonverbal cues, predict each other’s moves. They were in sync. “If you left my dad and I as partners for the entire evening, we would destroy you.”

After graduating from high school in suburban Atlanta, Vail earned a bachelor’s degree in microbiology from the University of Georgia in 1982. Four years later, she landed in Kalamazoo as a researcher for the pharmaceutical giant Upjohn.

Vail realized at Upjohn that she was isolated. The lab work she did was, by its nature, singular. The scientist would stand at the lab bench and repeat tests, altering the molecular structure of a drug ever so slightly each time, waiting to see what happened to the cells.

With just a bachelor’s degree, she knew she had risen “about as far as I could go” without getting another degree. In 1996, she earned a master’s in public health administration at Western Michigan University in Kalamazoo.

She saw an advertisement for an emergency preparedness position in Kalamazoo County’s Health Department. She applied for the position and was hired.

She was developing and implementing emergency plans for every imaginable disaster, including a novel respiratory outbreak like COVID. She was soon promoted to deputy health officer in Kalamazoo and then in 2006 to the role of health officer.

While she had been strategizing and roleplaying widescale crises, in July 2010, she had to deal with one firsthand. Over a million gallons of thick tar sands oil had been pumped into the Kalamazoo River, creating a 37-mile-long disaster zone. A dam in Kalamazoo was the only hope to prevent the oil from reaching Lake Michigan. Had the oil flowed over the dam, Vail said, it would have mixed with EPA superfund sites, creating unknown ecological and health problems. Fortunately, that didn’t occur.

During a conversation with City Pulse at the one-year anniversary of COVID-19’s arrival in Michigan, Vail talked about how she and Dr. Adnike Shoyinka, the Health Department’s medical director — who will succeed her as health officer — were in Washington when their phones began to blow with notifications heralding the arrival of the virus.

“This is it — what we have been worrying about,” Vail said.

The two were in D.C. to participate in a conference focused on another epidemic of concern to Vail, the opioid crisis. The conference was about medically assisted treatment for opioid addiction. That’s an intervention where a doctor oversees the slow reduction of opioids to wean a person off the medication and prevent overwhelming withdrawal symptoms.

While groups like Punks With Lunch are successfully operating syringe exchange and Narcan distributions, it was Vail, in partnership with the Ingham Community Health Center’s board, that drove a rewrite of Lansing’s drug paraphernalia law to bring it in line with state law. That move cleared the way for Vail to greenlight syringe programs as necessary to stop infectious diseases.

“I faced questions about this. People who would come up to me and say syringe access was encouraging addiction,” she said. “That’s not what the science says. It says that when people have access to clean needles, they don’t get a disease like hepatitis and HIV. We keep them alive.”

Tennis said Vail has the unique ability to center public health on people.

“She just sees people as people,” he said. “She’s them as people first.”

As Vail shifted her focus to the pandemic, stress started to take its toll. She, like most Michiganders, found her routines disrupted, often obliterated. While she could still run — a hobby she began when she was 30 — she couldn’t do the weightlifting work in the gym. That was another exercise regimen she picked up at 35, and it had the bonus of helping her run in marathons.

With a microbiology degree, Vail understood the science of COVID better than most. That helped her to direct the emergency responses to the virus and reflected her fusion of people skills and science skills.

Compounding the pressure of leading Mid-Michigan’s fight against COVID, she also had to cope with having lost her father.

In 2019, he was planning to travel by car to Michigan from his home in Weslaco, Texas. Vail said while he was 83, she had no concerns about his driving up for a visit. It was not uncommon for him to make this trip. The two planned to text and call each other as he traveled the route to Michigan.

“I started texting him to figure out where he was, and he didn’t answer,” Vail said. She was trying to determine if he had been in an accident or had some emergency in a hotel room. But she she thought someone would have contacted her had that been the case.

“I finally sent the police to do a wellness check on him at his home in Texas, and that’s where they found him,” Linda said. “He actually never left — had just died. I still don’t know really what caused that.”

As the first anniversary of his death loomed, Vail was battling with locals in East Lansing over an outbreak of COVID-19 linked to Harper’s, a popular nightlife location. Ultimately, 185 cases of the disease statewide were linked epidemiologically to the bar.

As she was hammering away at the science, doing interviews with local, state and national news outlets, she was also struck with grief over her father’s passing.

“I guess I didn’t expect that the one-year anniversary of his death was going to hit me like it did,” Vail said, noting it was one of the few times she became emotional during the crisis. “The only thing I can think is that it was really traumatic, you know? So, it was like reliving a trauma, in a way, because I had no clue I was about to lose my father.”

In Kalamazoo, she was keenly aware that racial disparities in health outcomes were everywhere the department touched. Maternal and infant health issues, preventable disease like heart disease and diabetes were far more prevalent among African Americans.

“She saw it right away because  she had already been doing the work to understand white privilege,” Canady said about Vail’s preparedness to inherit a health department with a robust social justice program. “She was ready for it.”

Early on, Vail encouraged county commissioners to adopt a “health in all policies” policy, which required departments to evaluate their proposals and spending through the prism of health and health equity.

“That, at first, meant the departments coming to the Health Department to do a health impact evaluation,” she said. “Eventually, I had to say, ‘No, you need to do this.’”

It worked. Departments now do this work as part of their normal routines.

In spring and summer 2020, the streets filled with protesters furious over the death of George Floyd in Minneapolis. The Black man was shown on video suffocating to death as police officers stood by and allowed another to kneel on his neck.

Working with department heads and elected officials, Vail supported those who advocated for a declaration that racism was a public health crisis.

“If you start digging into a problem and you keep coming back to systems that have been created to be unequal from the beginning, you have to come to a point where you’re not saying politely, ‘There is racial inequity here. Or a racial disparity.’ No. The right thing to do is the courageous thing to do, and that is to state the facts. Racism is the problem.”

The Board of Commissioners adopted the resolution on June 11, 2020. The pandemic, at that moment, seemed to be receding.

“My partner is a little bit older than I am,” she said. “I want time to do things with him.”

She never saw herself retiring at 61. She always thought she would retire later in her 60s. But COVID, while not entirely the driving force, played a role in her hanging up her team meetings and county emails for the tranquility of retirement.

She and her partner Mike Eyia, 73, a musician who leads the band Orquestra Ritmo, will likely travel. The two were in Morocco in the autumn. Vail’s Facebook feed is filled with photographs of the country and the people. Vail also wants to spend more time with her two granddaughters in Kalamazoo, where she has a daugher. She also has a son in Las Vegas.

Vail and Eyia boarded a plane for for Belize on Monday. A friend had offered them the use of his home there, Eyia said while watching Vail get her picture taken,

While she won’t be a health officer, she’ll remain involved, she told City Pulse in an interview in August after she informed the county that she would retire in six months.

“My brain is engaged in thinking about everything — infectious disease, how they spread, equity, justice. I don’t anticipate my brain shutting down around those things.”

Despite Rising Hospitalizations, Omicron Is Not Worse for Children